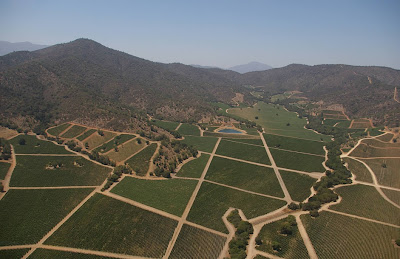 Valparaiso
From this place we rode on to the town of S. Fernando. — Before arriving there, the inland basin expands into a great plain, which to the South is so extensive that the snowy summits of the distant Andes were seen as over the horizon of the sea. — S. Fernando was my furthest point to the South, it is 40 leagues from St Jago. From this point I turned at right angles to seaward. — We slept at the gold mines of Yaquil near Rancagua, in the possession of Mr Nixon, an American gentleman. — I staid at this place four days, during two of which I was unwell. — Where Mr Nixon lives the Trapiche or grinding mill is erected; the mine itself is at the distance of some leagues & nearly at the summit of [a] high hill. On the road we passed through some large woods of the Roble or Chilian oak; this tree from its ruggedness & shape of leaf & manner of growth deserves its name. (Note in margin: The Roble of Chili is different from the Roble of Chiloe.) This is its furthest limit to the North. I was glad to see anything which so strongly reminded me of England. — To the South there was a fine view of the Andes including the Descabezado described by Molina. — To the North I saw part of the lake of Taguatagua, with its floating islands: these islands are composed of various dead plants; with living vegetation on the surface, they float about 4 feet above the surface: as the wind blows they pass over the lake, carrying with them cattle & horses.
Posted by Arborfield at 07:17