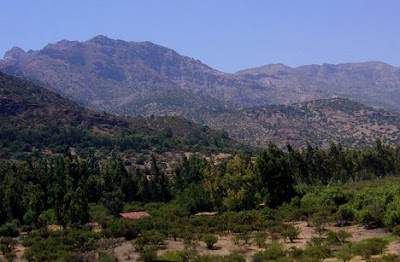 Valparaiso
When we arrived at the mine, I was struck by the pale appearance of many of the men, & enquired from Mr Nixon respecting their state. The mine is altogether 450 feet deep, each man brings up on his back a quintal or 104lbs weight of stone. With this load they have to climb up the alternate notches cut in a trunks of trees placed obliquely in the shaft. Even beardless young men of 18 & 20 years with little muscular development of their bodies (they are quite naked excepting drawers) carry this great load from nearly the same depth. — A strong man, who is not accustomed to this sort of exercise perspires most profusely with merely carrying their own bodies up. — With this very severe labor they are allowed only beans & bread; they would prefer living entirely upon the latter; but with this they cannot work so hard, so that their masters, treating them like horses, make them eat the beans. — Their pay is 25 or 30s per month. — They only leave the mine once in three weeks, when they remain with their families two days. — This treatment, bad as it sounds, is gladly accepted; the state of the labouring Agriculturist is much worse, many of them eat nothing but beans & have still less money. — This must be chiefly owing to the miserable feudal-like system by which the land is tilled. The land-owner gives so much land to a man, which he may cultivate & build on, & in return has his services (or a proxy) for every day for his life gratis. Till a father has a grown up son to pay his rent by his labor, of course there is no one to take care of the patch of ground. Hence poverty is very common with all the labouring classes.
Posted by Arborfield at 07:33