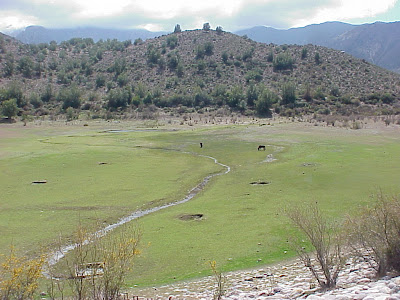 Illapel to Los Hornos
Travelled on to Los Hornos, which is a "Mineral" or particular district abounding with mines; the principal hill was so drilled with excavations that it was a magnified edition of a large Anthill. The Miners in Chili are a peculiar race of men; in their habits they somewhat resemble men-of-war sailors; living for weeks together in the most desolate spots, when they descend on the feast days to the villages, there is no excess or extravagance into which they do not run. They sometimes gain a considerable sum & then like Sailors with prize money, they try how soon they can possibly squander it. They drink excessively, buy quantities of clothes & in a few days return penniless to their miserable abodes there to work harder than beasts of burden.

Their dress is peculiar & rather picturesque; they wear a very long shirt of some dark coloured baize & leathern apron; around the waist there is also a broad & gayly coloured Senador (like the red silk woven band of officers); their trowsers are very broad & their heads are covered by little scarlet caps. — We met a party of these Miners on horseback in full costume, carrying for burial the body of one of their companions. — They marched at a very quick trot; four men on foot carried the corpse; each set running as hard as they could for about 200 yards, were relieved by four others who had previously dashed on ahead on horseback & so on.— They encouraged each other by wild crys; altogether it formed a most strange funeral.
Posted by Arborfield at 07:12