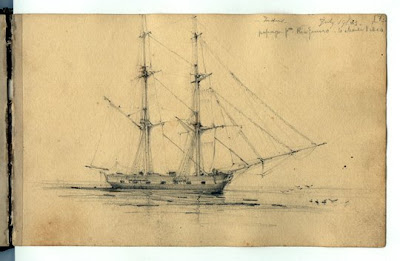 An expanse of fairly calm water stretches across the foreground and midground. To the right, a flock of some half-dozen seabirds is flying low over the water and slightly behind three others floating and one alighting. In the midground we see the boat itself, in a detailed side-on view, with two main masts on which the rigging is shown in detail. All masts have raised sails: four on each main mast, with a single sail on the smaller masts in the stern and prow. The hull has seven oblong openings at even intervals along the side. The tops of the structures on the deck are visible. The main masts cast reflections in the water. The sky and the horizon are blank.
.
They voyage from the Falklands to Santa Cruz ends on the 13th... and thankfully, Darwin takes up the narrative at that time.
Posted by Arborfield at 08:01