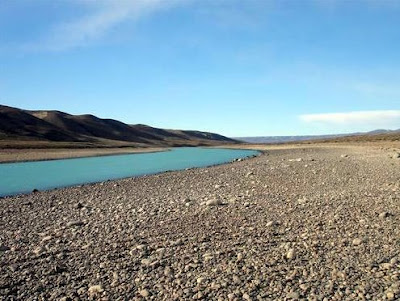 R. Santa Cruz
The bed of the river is rather narrower hence the stream more rapid; it generally runs nearly 6 knots an hour. In the channel there are great blocks of Lava which together make the tracking both laborious & very dangerous. Yesterday two holes were knocked through the sides of one of the boats, but she was got on shore & repaired, without any further damage. I shot a Condor, it measured from tip to tip of wing 8 & 1/2 feet — from beak to tail 4 feet. They are magnificent birds; when seated on a pinnacle over some steep precipice, sultan-like they view the plains beneath them. I believe these birds are never found excepting where there are perpendicular cliffs. Further up the river where the lava is 8 & 900 feet above the bed of the river, I found a regular breeding place; it was a fine sight to see between ten & twenty of these Condors start heavily from their resting spot & then wheel away in majestic circles.

Captain Fitzroy’s Journal:
Similar country. On the banks of the river some drift wood was found; the trunks of trees of considerable size. Small trees had been found lying by the side of the river, from time to time, but none so large as these, some of which were almost two feet in diameter, and about thirty feet in length. The wood appeared to be 'Sauci,' of the red kind. That these trees had been drifted from a great distance was evident, because they were much water worn.
Posted by Arborfield at 08:04