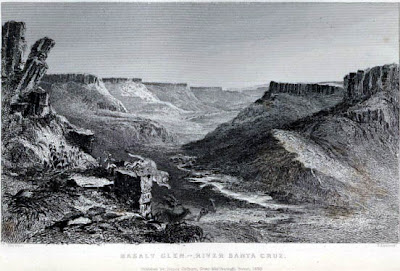 R. Santa Cruz
This day I found, for the first time, some interesting work; the plains are here capped by a field of Lava, which at some remote period when these plains formed the bottom of an ocean, was poured forth from the Andes. This field of Lava is on a grand scale; further up the river it is more than 300 feet thick, & the distance from its source is great. The most Southern Volcanic rocks in the Andes hitherto known are many hundred miles to the North, not far from the island of Chiloe. The Lava caused many small springs; the valleys here were greener & I recognised many plants of Tierra del Fuego. The Guanaco was in his element amongst the rugged low precipices.
It is curious how in many cases the scenery is totally dependent on the geology; some of the valleys so precisely resembled those at St Jago, that if I could have added the warmth of a Tropical day I should have looked about me to recognize old-frequented spots.
Captain Fitzroy’s Journal:
On this day our best shots succeeded in killing two guanacoes, but they died out of our reach, and probably became food for pumas, instead of man. The order of our march was usually one or two riflemen in advance, as scouts—Mr. Darwin, and occasionally Mr. Stokes, or Mr. Bynoe, upon the heights—a party walking along the banks, near the boats, ready to relieve or assist in tracking, and the eight or ten men who were dragging the three boats along at the rate of about two miles an hour over the ground, though full eight knots through the water. Difficult places to pass—delays caused by embarking and disembarking frequently to change banks, and avoid impediments—the necessary observations, rest, and meals, occupied so much time that we did not average more than twelve miles in one day: and even that small distance was not accomplished without making both shoulders and feet sore.
Posted by Arborfield at 21:42