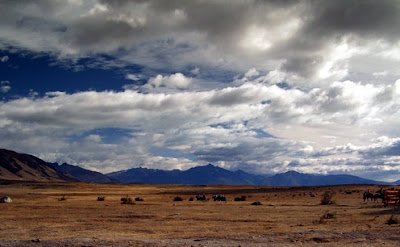 R. Santa Cruz
We continued to get on but slowly. The Captains servant shot two Guanaco: Before the men could arrive to carry them to the boats the Condors & some small carrion Vultures had picked even the bones of one clean & white, & this in about four hours. The Guanaco probably weighed 170 or 180 pounds. When the men arrived, only two Condors were there & some small Vultures within the ribs were picking the bones.

Captain Fitzroy’s Journal:
The snowy summits of the distant Cordillera were more distinctly seen from the heights, near the river, that rise about a thousand feet above its level, which, there, is about three hundred feet above that of the sea. Two guanacoes were shot with my rifle by H. Fuller, who hastened to the boats for assistance. Some of our party went directly with him to bring in the animals, but condors and cara-caras had eaten every morsel of the flesh of one; though the other was found untouched and brought to the boats. Four hours had sufficed to the cara-caras and condors for the cleaning of every bone. When our party reached the spot some of those great birds were so heavily laden that they could hardly hop away from the place. The guanaco that was eaten by the birds must have been, by his size, at least fifty pounds heavier than any shot by us in Patagonia, therefore about 300lbs. Mr. Darwin and Mr. Stokes had much amusement with these animals, upon the heights. Being so much tamer there and more numerous, whole flocks were driven by them into narrow defiles, where dozens might have been killed had there been more people with guns, lassoes, or balls.
Though the bed of the river is there so much below the level of the stratum of lava, it still bears the appearance of having worn away its channel, by the continual action of running water. The surface of the lava may be considered as the natural level of the country, since, when upon it, a plain, which seems to the eye horizontal, extends in every direction. How wonderful must that immense volcanic action have been which spread liquid lava over the surface of such a vast tract of country. Did the lava flow from the Cordillera of the Andes, or was it thrown out from craters in the low country? Its position with respect to subaqueous deposits, its horizontal surface and cellular texture, are reasons, among others, for thinking that it was thrown out of the earth, while these plains were covered by a depth of sea.
The valley, or channel of the river, varies here from one mile, or less, to about three miles; but it looks narrower, owing to the deception caused by high land on each side. Some of the views are certainly striking, and, from their locality, interesting; I could not, however, have believed that the banks of any large fresh water river could be so destitute of wood, or verdure of any kind, or so little frequented by man, beast, bird, or fish.
Posted by Arborfield at 07:59