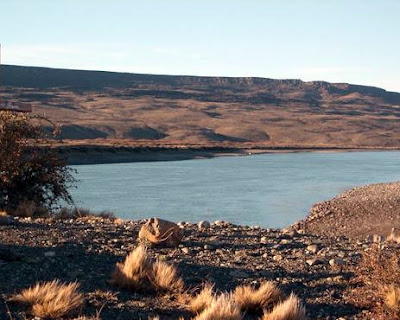 R. Santa Cruz
Like the old navigators approaching an unknown land, we examined & watched for the most trivial signs of a change; the drifted trunk of a tree, a boulder of primitive rock were hailed with joy, as if we had seen a forest growing on the stony ridges of the Andes. But the most promising, & which eventually turned out true sign, was the tops of a heavy bank of clouds which constantly remained in nearly the same place. These at first were taken for mountains themselves, instead of the clouds condensed by their icy summits. A Guanaco was shot, which much rejoiced those who could not compel their stomachs to relish Carrion.

Captain Fitzroy’s Journal:
I noticed more than usual a curious effect of the river water being so much warmer than the air over it. At daybreak, and until after sunrise, the river was smoking, quite as if it were boiling. This day we passed some earthy cliffs between two and three hundred feet in height, and where they came in our way it was extremely difficult to manage the boats and tow-lines; but by veering out at those times a great length of rope, our object was accomplished without any disaster. Near these cliffs the valley of the river begins to contract and become more irregular, and the sides or breaking down of the higher ranges become more abrupt and are nearer to the river. In most places we found a cliffy side opposite to a low projecting point of shingle, but in some spots that we passed both sides were high, and we had no choice on which to take the tow-line. The difference, also, between the level of the higher ranges and that of the river, was observed to be much increased.
Posted by Arborfield at 08:03