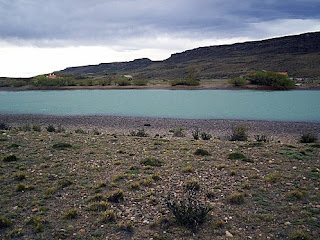 R. Santa Cruz
The country remains the same, & terribly uninteresting, the great similarity in productions is a very striking feature in all Patagonia, the level plains of arid shingle support the same stunted & dwarf plants; in the valleys the same thorn-bearing bushes grow, & everywhere we see the same birds & insects. Ostriches are not uncommon, but wild in the extreme. The Guanaco, however, is in his proper district, the country swarms with them; there were many herds of 50 to 100, & I saw one, with, I should think 500.

The Puma or Lion & the Condor follow & prey upon these animals; The footsteps of the former might almost every-where be seen on the banks of the river. The remains of several Guanaco with their necks dislocated & bones broken & gnawed, showed how they met their deaths. Even the very banks of the river & of the clear little streamlets which enter it, are scarcely enlivened by a brighter tint of green. The curse of sterility is on the land. The very waters, running over the bed of pebbles, are stocked with no fish: Hence there are no water-fowl, with the exception of some few Geese & Ducks.


Captain Fitzroy’s Journal:
We had not advanced a mile this morning, when fresh tracks of Indians, on horseback, trailing their long lances, aroused our utmost vigilance. We thought they had been reconnoitring our party, at day-light, and perhaps such was the case. The smoke of their fires was seen behind the nearest range of low hills, on our side of the river, being then on the north bank, but the boats had been tracking on either side, as better ground for walking was found. Proceeding on, a dead animal was found in the water, which proved to be a guanaco; how it came by its death did not appear, as it showed no external wound, but some of our party, hungrier or less squeamish than the rest, immediately proposed dividing and eating it; and hunger carried the day: the dead animal was hauled on shore, cut to pieces, and distributed. The guanaco steaks were much relished by all except two or three, who could not conquer their antipathy to supposed carrion. Our meal was eaten close to the place where we thought a tribe of Indians was encamped: and, in consequence, our arms were kept in readiness, and a careful watch set. Afterwards cautiously proceeding, we arrived at the spot whence the smoke had issued, but saw no human beings: though marks of very recent fire, and numerous tracks of feet upon a soft muddy place at the side of the river, showed that a party of Indians had lately crossed over, and a smoke rising at some distance on the southern shore, pointed out where they were gone. At this spot there was about an acre of good pasture land, by the water side: and the breadth of the river itself was something less than usual, reasons which had induced the natives to select it as a crossing place. To pass a river running at the rate of six or seven miles an hour, and about two hundred yards in width, can be no easy task to women and children. But as we saw many prints of very small feet on the muddy bank, both women and children must have crossed at this place with the men. How did they get over? there is no wood, neither are there rushes with which they might make balsas.† Perhaps some of the women and children were put into rough, coracle-like boats, made of hides,‡ and towed across by the horses, holding by whose tails the men swam and perhaps many of the women. This method of holding by the tail, while swimming, is said to be better than resting a hand upon the horse's neck and holding by the mane. None of the Indians sit upon their horses while swimming.

This day we passed two places which we considered rapids, the stream of the river ran so violently, and we had so much difficulty in passing, even with all hands upon the rope. Besides the strength of the stream we had to contend against high cliffs, over whose upper edges it was difficult to convey the tow-line: yet we made good about twelve miles in the day.

The night of the 22d was not so cold as the preceding, but we always found the nights wintry though the days were warm, so much so, indeed, that we were often annoyed by the heat of the sun. So winding was the course of the river that we certainly walked double the distance which was advanced in a direct line: yet very little of interest, as a picturesque subject, had been seen; for no country excepting a desert could wear a more triste and unvarying appearance.

Immense accumulations of shingle, rounded stones, imbedded, as before mentioned, in diluvial deposition, form the level plain, or valley, through which the river pursues its very winding course. The width of this vale varies from one mile to five miles, and the level of the shingle plain is from three hundred to one thousand feet below that of the adjacent higher, but still horizontal ranges—whose broken-down ends, or sides, form the boundaries of the valley through which the river flows. Those of the higher ranges look like hills when one is in the valley, and it is not until after ascending to their summits that their real nature is seen; when, instead of being inclined to consider those heights as hills, one becomes disposed to think the valley of the river a vast excavation, cut down below the level of the neighbouring country. But on the height, or in the valley, all is an unprofitable waste. Scarcely, indeed, could we find bushes enough, even near the river, to make our nightly fires, after the third day's journey. The wiry, half-withered grass upon which the guanacoes feed is so scanty, that they are obliged to wander over much ground in search of their food. Those few stunted bushy trees which are found here and there, near the river, are a kind of thorn trees, the wood of which is extremely hard and durable. The night of the 22d we passed by the side of a little cove, which sheltered the boats from the strength of the stream: and, as all hands were tired, we rested during the morning of the following day.
Posted by Arborfield at 08:33