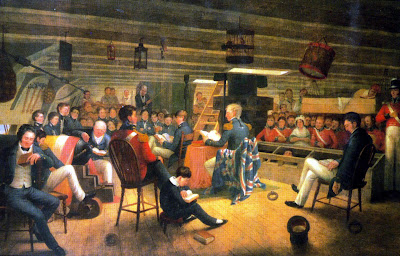 [Divine Service on the Beagle]
In the Pacific
On the 27th the purser of the Beagle, Mr Rowlett expired; he had been for some time gradually sinking under a complication of diseases; the fatal termination of which were only a little hastened by the bad weather of the Southern countries. Mr Rowlett was in his 38th year; the oldest officer on board; he had been on the former voyage in the Adventure; & was in consequence an old friend to many in this ship; by whom & everyone else he was warmly respected.
Captain Fitzroy’s Journal:
On the 27th we witnessed the last moments of Mr. Rowlett's existence in this world. He had long been sinking under an internal complaint of which it was impossible to cure him, except by a vigorous and uniform mode of treatment to which he was not willing to conform until too late: but his illness had no relation whatever to the service in which he had been employed. He was much regretted by all of us, having been a kind, honourable friend.
Posted by Arborfield at 08:10