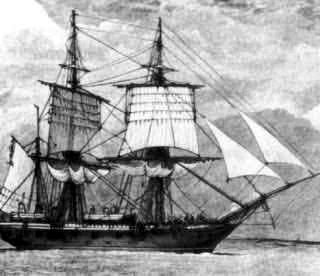 Straits of Magellan
We were delighted in the morning by seeing the veil of mist gradually rise from & display Sarmiento. — I cannot describe the pleasure of viewing these enormous, still, & hence sublime masses of snow which never melt & seem doomed to last as long as this world holds together. The field of snow extended from the very summit to within 1/8th of the total height, to the base, this part was dusky wood. — Every outline of snow was most admirably clear & defined; or rather I suppose the truth is, that from the absence of shadow, no outlines, but those against the sky, are perceptible & hence such stand out so strongly marked. — Several glaciers descended in a winding course from the pile of snow to the sea, they may be likened to great frozen Niagaras, & perhaps these cataracts of ice are as fully beautiful as the moving ones of water.

By night we reached the Western parts of the Channel; in vain we tried to find anchoring ground, these islands are so truly only the summits of steep submarine mountains. We had in consequence to stand off & on during a long, pitch-dark night of 14 hours, & this in a narrow channel. — Once we got very near the rocks; The night was sufficiently anxious to the Captain & officers.

Captain Fitzroy’s Journal:
Good equal altitudes having been obtained, after an interval of time sufficient for rating our chronometers, we sailed from Port Famine, went down the Magdalen Channel, enjoying some fine scenery, among which Sarmiento was pre-eminent, and anchored in a cove under Cape Turn.

Syms Covington Journal:
Sailed from Port Famine for the last time, accompanied by the schooner ADVENTURE. Going before the wind, with a fine breeze, had a fine view each side, as we ran up the straits; "The highland is totally covered with snow. Its dense forests, with Sarmiento towering above all, and to appearance, like an immense mass of ice, had altogether a most beautiful and grand effect".
Posted by Arborfield at 06:28