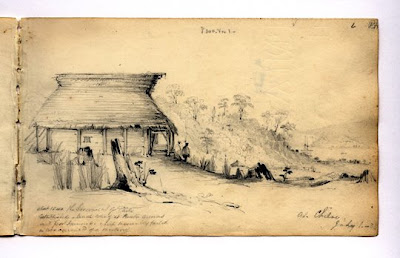 Chiloe
I staid in the town of S. Carlos three days, during the greater part of this time the weather was very fine; the inhabitants themselves wondering at such an event. — I do not suppose any part of the world is so rainy as the Island of Chiloe. — The Cordilleras are very rarely in sight; one morning before sun-rise we had a very fine view of the Volcano of Osorno; it stood out in dark relief; it was curious to see as the sun rose, the outline gradually lost in the glare of the Eastern sky. —1 During the fine weather I enjoyed some very pleasant walks about the town & examined the structure of the rocks. — This island like the plains of Patagonia is only an appendage to the Andes; it is formed of the debris of its rocks & of streams of Lava. — These submarine beds have been elevated into dry land only in a very recent period. — The soil resulting from the decomposition of these rocks is very fertile; but agriculture is as yet in its rudest forms; to this the structure of the mills & boats & their method of spinning quite correspond. — The inhabitants, judging from their complexions & low stature, have ¾s of Fuegian or Boat Indian blood in their veins; they are all dressed in coarse strong woollen garments, which each family makes for themselves & dyes with Indigo of a dark blue color.

Although with plenty to eat, they are excessively poor; there is little demand for labor, & from the scarcity of money nearly all payments are made with goods. — Men carry on their backs from long distances, bags of charcoal, (the only fuel used in the town) to obtain the most trifling luxuries: the joy which the sight of a few Rests gave to these poor men was quite surprising; after making them a present, they always insisted on having your hand to shake it as a sign of their gratitude. — One day I walked a few miles on the road to Castro. This place was the former Capital & is now the second town in the island. The road is the only one which goes directly through the interior of the country. About two miles from S. Carlos it enters the forest, which covers the whole country & has only been rendered passable by the aid of the axe.2 For its whole length there are not more than two or three houses; the road itself was made in the time of the old Spaniards & is entirely formed of trunks of trees squared & placed side by side. From the gloomy damp nature of the climate, the wood had a dreary aspect; in the Tropics such a scene is delightful from the contrast it affords with the brilliancy & glare of every open spot. The country generally is only inhabited round the shores of the creeks & Bays, & in this respect it resembles T. del Fuego; the road by the coast is in some places so bad that many houses have scarcely any communication with others excepting by boats.
.
The capital itself is worthy of the island, it is a small straggling dirty village; the houses are singular from being entirely built sides, roofs, partitions &c of plank.3 The Alerce or cedar from which these planks are made grows on the sides of the Andes; they possess the curious property of splitting so evenly that by planning the planks are nearly as well-formed as if sawed. — These planks are the staple export of the Islands, to which may be added potatoes & hams.
*The main feature, standing in the left and left centre of the picture, is a timber frame thatched single storey building, with six somewhat irregularly spaced wooden uprights, a small barred window between the third and fourth uprights from the left, and a veranda at the right end. The thatched roof is `anvil'-shaped, i.e., the lower part pitched inwards and the upper part back outwards. The walls appear to be of horizontal timber boarding. In the foreground there are two treestumps, the left-hand one below the window, sawn off, the right-hand one closer to the viewer, leaning and broken, with new foliage beginning to sprout. To the left of both stumps there are tall tufts of grass. To the right of the building, two human figures stand close to the veranda, at the upper end of ground which slopes downwards from the centre to the right centre of the picture to lower rough level ground in the right of the picture, marked with more tufts of grass. At the left-hand edge of the lower level ground and at the right-hand edge of the picture are two more sawn or broken treestumps; new foliage is sprouting to the right of the first of these. Behind the building a verdant slope, falling from left to right and also just visible to the left of the roof, appears behind the right-hand side of the roof, covered with much shrubby vegetation and about nine trees, all but one of which are tall enough to rise against the blank sky. The trees are shown in leaf, and thus are evergreens, given the midwinter date of the sketch. Lower on the right, more distant ground stretches in front of an expanse of water. The upper rigging of a boat (the Beagle?) is just visible behind the lowest point of the verdant slope. On the far side of the water we can see the very vague indication of a far shoreline backed by low rounded hills. [Remarking on the vegetation of Chiloé, Charles Darwin comments in his diary for 29 June 1834: "This resemblance to Tropical scenery is chiefly to be attributed to a sort of arborescent grass or Bamboo, which twines amongst the trees to the height of 30 or 40 feet & renders the woods quite impervious.-- to this may be added some large ferns, the trees also are all evergreens, & the stems are variously coloured white, & red &c.--" (from Keynes, R. D., Charles Darwin's Beagle diary, p. 245)]
Posted by Arborfield at 08:27