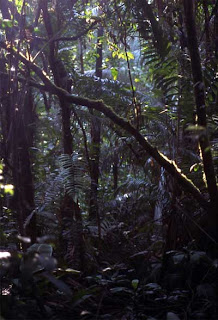 Rio de Janeiro
Took a long scramble through the woods; the bottom is so thickly strewed over with dry sticks & leaves, that in walking one makes as much noise as a large quadruped would.
This is very disagreeable, as it puts all birds & animals to flight, likewise destroys that quietness which is the principal charm of these forests. This morning has been the fourth attempt to reach the sea by crossing a mere band of wood. Each time I followed a track made by the woodmen, but as soon as that ended I was utterly disabled by the thickets from proceeding even five yards further.
Tonight there has been a good deal of lightening, & the air very sultry. Therm. 75°. As far as I am able to judge, it would seem that in hot countries, the effect produced on the body increases in a greater ratio than the temperature; that is to say, if at present the thermometer was to rise to 85° the debilitating effects would be more than double, than if it was at 80°.
Posted by Arborfield at 06:51