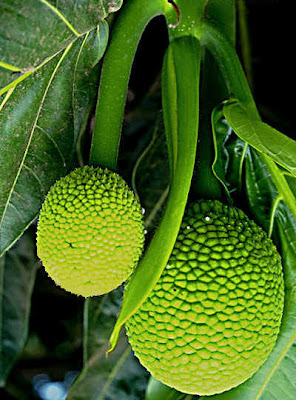 Rio de Janeiro
Walked to the Botanic Garden; this name must be given more out of courtesy than anything else; for it really is solely a place of amusement. The chief & great interest it possesses, is the cultivation of many plants which are notorious from their utility. There are some acres covered with the Tea tree. I felt quite disappointed at seeing an insignificant little bush with white flowers & planted in straight rows. Some leaves being put into boiling water, the infusion scarcely possessed the proper tea flavour. There were trees of Camphor, Sago, Cinnamon, Cloves & Pepper, the leaves of all, especially the Cloves & Cinnamon, had a delightful aromatic taste & smell. The Bread-fruit was growing in great luxuriance; the leaves from their great size & deep divisions were uncommonly handsome. Oh for the time, when I shall see it in its native Pacific isles. The Mango & Jack-fruit were likewise here; I did not before know their names.
The landscape about Bahia takes its character from these two most beautiful trees; as for the Mango I had no idea any tree could cast so black a shadow. They both bear to the evergreen vegetation of the Tropics the same ratio which laurels do to our English trees. In this zone these three latter, together with the Banana, Orange, Cabbage palm & Cocoa-nut tree, stand before all others (with the exception perhaps of the tree fern & some firs) in the beauty of their appearance; At the same time how remarkably they contribute to the subsistence of mankind: & in this double respect how far do they surpass those of Europe. The Tropics appear the natural birthplace of the human race; but the mind, like many of its fruits seems in a foreign clime to reach its greatest perfection.
Posted by Arborfield at 13:29