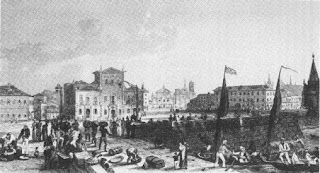 Rio de Janeiro
Went on board the Warspite, a 74 line of battle ship, to see her inspected by the Admiral. It was one of the grandest sights I ever witnessed. When the Admiral arrived the yards were manned by about 400 seamen; from the regularity of their movements & from their white dresses, the men really looked more like a flock of wild-fowl than anything else. When a ship is inspected, everything is done precisely the same as if she was engaged with an enemy; and although on paper it may sound like child’s play, in the reality it was most animating. One almost wished for an enemy, when the awful words were shouted to the great batteries below: "Clear for Action".
.
After having manoeuvred the enormous guns and proved how well & easily it was done. Fire in the Cock-pit sung through the decks, in perfect order, the guns yet working, the pumps were rigged, the fire engines brought into play, and all the firemen with their buckets. The action became hotter. (nobody knew what was coming). The Admiral sung out "a Raking shot has cut our fore-shrouds". "Captain Talbot wared ship: cut away the mizzen mast, in an instant men with their axes sprung to their places: and then it was truly wonderful how soon the store rooms were opened and vast ropes brought to support the tottering fore mast. The admiral was determined to puzzle them: during all this bustle he ordered a broadside, and shouted the main shrouds and fore stay are gone. In short in a few minutes all our principal ropes were cut through and joined.
.
Perhaps however the most glorious thing was when the Bugle gave the signal for the Boarders; the very ship trembled at so dense a body rushing a long with their drawn cutlasses. The appalling shout, with which the English seamen execute the most dangerous service he is ever called upon to perform, was the only thing that was absent.
.
In the evening dined with the Admiral & afterwards enjoyed the calmer pleasure of reading letters from Shropshire.
Posted by Arborfield at 06:37