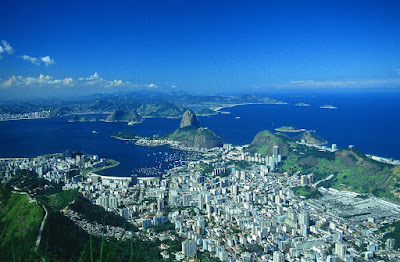 [Modern view from the top of Corcovado]
Rio de Janeiro
Walked to the city to procure some things which I wanted, then joined Earl & Derbyshire & we proceeded together to ascend the Cocovado. The path for the few first miles is the Aqueduct; the water rises at the base of the hill & is conducted along a sloping ridge to the city. At every corner alternate & most beautiful views were presented to us. At length we commenced ascending the steep sides, which are universally to the very summit clothed by a thick forest. The water-courses were ornamented by that most elegant of all vegetable forms, the tree fern. they were not of a large size, but in the vividness of the green lightness of the foliage, & in the beautiful curve of head, they were most classically admirable.
We soon gained the peak & beheld that view, which perhaps excepting those in Europe, is the most celebrated in the world. If we rank scenery according to the astonishment it produces, this most assuredly occupies the highest place, but if, as is more true, according to the picturesque effect, it falls far short of many in this neighbourhood.
Everybody has remarked that a landscape seen from an eminence loses much of its beauty, & although here the two elements are largely present, which perhaps are least injurious from this cause, viz. an extent of forest land & of open sea, yet the observation holds good. The Caucovado is about 2000 feet high, one side of it for nearly 1000 is so precipitous, that it might be plumbed with a lead, at the foot there is a large wood; nothing pleased me so much as the beautiful appearance this presented when seen so nearly vertically. It would lead one to suppose that the view from a Balloon would be exceedingly striking. Some years ago a poor insane young woman threw herself from this summit; in few places could a more horrible lovers leap be found. Our present host, Mr Bolga, was one of the first who found the corps dashed into pieces amongst the trees & rocks.
Posted by Arborfield at 08:18