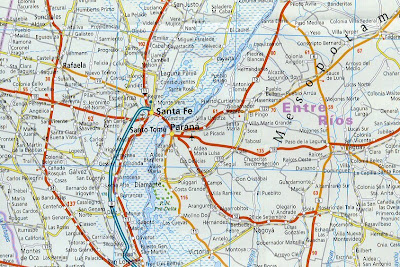 St Fe
By the indolence of the master & from bad weather I was delayed five days. The time passed pleasantly & was enabled to see the geology of the surrounding district. And this possessed no common interest. The Bajada itself, a quiet town; about as large as St Fe or St Nicholas; it contained in 1825, 6,000 inhabitants. The whole province only contains 30,000. Yet here there are representatives, ministers, standing army, governors &c &c. Few, as they are, none have suffered more from desperate & bloody revolutions. In some future day however this will be one of the finest provinces. As its name expresses, it is surrounded on every side by the magnificent rivers, the Parana & Uruguay, the land is most fertile. Here there is no fear of the Indians; an immense advantage over their neighbours; to the North of St Fe, there is not a single Estancia on the West of the Parana; & we have seen that the road is not safe between the Capital & Coronda.
My usual walk during these days was to the cliffs on the Parana to admire the view of the river & pick up fossil shells. Amongst the fallen masses of rock, vegetation was very luxuriant; there were many beautiful flowers, around which humming birds were hovering. I could almost fancy that I was transported to that earthly paradise, Brazil.
Captain Fitzroy’s Journal:
On the 6th of October we returned to Maldonado; to prepare for a long excursion southward, and to hasten the equipment of.
Posted by Arborfield at 21:48