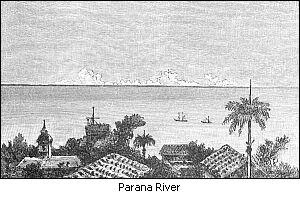 Buenos Ayres to St Fe
Started by moonlight & arrived at the R. Carcavàna by sun rise. This river is also called the Saladillo, & it deserves the name for the water is brackish. I staid here the greater part of the day, searching for bones in the cliff. Old Falkner mentions having seen great bones in this river.
.
I found a curious & large cutting tooth. Hearing also heard of some "giants" bones on the Parana, I hired a canoe; there were two groups of bones sticking out of a cliff which came perpendicular into the water. The bones were very large, I believe belonging to the Mastodon. They were so completely decayed & soft, that I was unable to extract even a small bone. In the evening rode on another stage on the road, crossing the Monge, another brackish stream.
Posted by Arborfield at 08:01