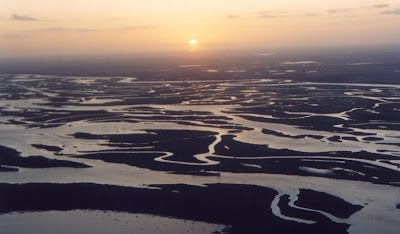 [The Parana]
Buenos Ayres to St Fe
Crossed the Arrozo del Medio & entered the Province of St Fe. I had been forewarned that nearly all the good people in this province are most dexterous thieves; they soon proved it, by stealing my pistol. The road generally ran near the Parana, & we had some fine glimpses of it. We crossed several streams; the water of the Pabon in a good body formed a cascade 20 feet high. This must be a most unusual phenomenon in this country. At the Saladillo I saw the curious occurrence of a rapidly running brook with water too salt to drink. Entered Rozario, a large & striking looking town, built on a dead level plain which forms a cliff about 60 feet high over the Parana. The river here is very broard with many islands which are low & wooded, as is also the coast of the opposite shore. The view would resemble that of a great lake, if it were not for the linear shaped islands, which alone, give the idea of running water. The cliffs are the most picturesque part, sometimes absolutely perpendicular & of a red colour, at other times in large broken masses covered with Cacti & Mimosa trees. The real grandeur however of an immense river like this, is derived from reflecting how important a means of communication & commerce it forms between one nation & another — to what a distance it travels — from how vast a territory it drains the great body of fresh water which flows before your feet. At Rozario, I had a letter of introduction to a most hospitable Spaniard, who was kind enough to lend me a Pistol. Having obtained this most indispensable article; I galloped on as far as the Colegio de St Carlos. A town known by the size of its church & it is said, the hospitality & virtue of the friars. For many leagues to the North & South of St Nicholas & Rozario the country is really level; it deserves nearly all which travellers have written about these plains. Yet I have never seen a spot where by slowly turning round, objects could not be seen at a greater distance in some points than in others; and this manifestly proves an inequality in the plain. As at sea, the horizon is of course very limited; this entirely destroys a degree of grandeur which one would be apt to imagine a vast level plain would possess. On the sea, your eye being 6 feet above the water, the horizon is distant 2 4/5 miles.
Posted by Arborfield at 09:03