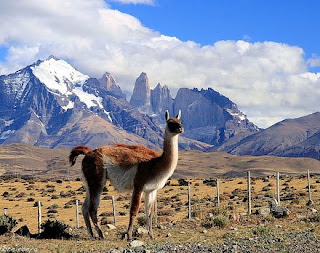 Sierra de la Ventana
In the morning we fairly scudded before the gale, & arrived by the middle of the day at the Sauce Posta. On the road we saw very great numbers of deer & near the mountain a Guanaco. I should think this latter animal was not to be found any further North on this side of S. America. The plain which abuts against the Sierra is traversed by curious ravines, they are not above 20 feet wide & at least 30 deep; there are very few places where they are passable. I staid the evening at the Posta, the conversation, as is universally the case, being about the Indians. The Sierra de la Ventana, was formerly, a great place of resort for the Indians; three or four years ago there was much fighting there; my guide was present when many men were killed; the women escaped to the saddle back & fought most desperately with big stones; many of them thus saved themselves.
Captain Fitzroy’s Journal:
In these surveying trips along-shore we always anchored when we could, in order to preserve our station and connect triangles; but, of course, we were often obliged to weigh again at short notice, during the night; therefore every preparation was made for any change of wind or weather, and a careful look-out always kept upon the deep-sea lead (invariably attended throughout the night), as well as upon the sympiesometer, the sky, and the water. I mention the deep-sea lead particularly, because however shallow the water may be, mistakes are often made with the hand-lead, especially at night, when a tide or current is running, in consequence of the lead being drifted by the action of the water upon it and the line, and deceiving even a moderate leads-man; who sometimes thinks the water much deeper than it really is—sometimes the reverse; and never can tell exactly, under such circumstances, how a ship is moving over the ground, or whether she is dragging her anchors.
Posted by Arborfield at 07:34