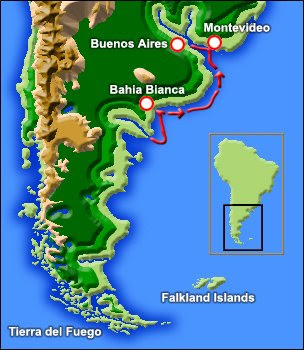 Captain Fitzroy’s Journal:
On the 7th of September, we finally left Blanco Bay;* but again sounded along the dangerous banks of Anegada Bay, determined to do our utmost to prevent vessels from getting ashore there in future, as many have done already, especially during the blockade of Buenos Ayres, when several prizes, which had been taken from the Brazilians, were wrecked and totally lost.
* Mr. Darwin had previously departed on his road to Buenos Ayres.
Posted by Arborfield at 07:37