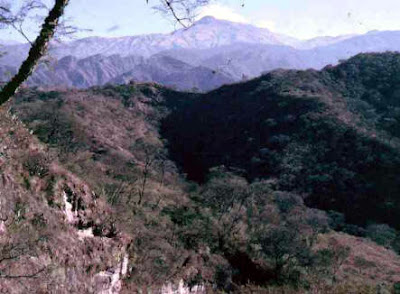 Sierra de la Ventana
Proceeded on to the 3d Posta, in company with the Lieutenant who commands it. The distance is called fifteen leagues; but it is only guess-work & generally too much. The road was uninteresting over a dry grassy plain, & on our left hand at a greater or less distance were low hills, a chain of which we crossed close to the Posta. Before our arrival we met a large herd of cattle & horses, guarded by fifteen soldiers, we were told that many had been lost. It is very difficult to drive animals across these plains; if a lion or even a fox approaches the horses in the night, nothing can prevent their dispersing in every direction; and a storm will have the same effect. A short time since, an officer left Buenos Ayres with 500 horses; when he arrived at the army he had under twenty. Shortly afterwards we perceived by the cloud of dust that a party of horsemen were approaching; my companions perceived at a great distance, by the streaming hair, that they were Indians. The Indians often have a narrow fillet round their heads, but never any covering; the long black hair blowing across their faces heightens to an uncommon degree the wildness of their appearance. They turned out to be a part of Bernantio's tribe going to a Salina for salt. The Indians eat much salt, the children sucking it like sugar; it is a curious contrast with the Gauchos, who living the same life, eat scarcely any. My companions seemed to think there was not the slightest danger in meeting these gentlemen, & they know best, but I heard the Commandante of Bahia Blanca tell one of our officers, that he thought it unsafe for two or three to visit them, although they are professedly the most friendly Indians.

Captain Fitzroy’s Journal:
Off Starve Island we were obliged to weigh in a hurry, one night, owing to a gale coming on from the south-east, and during the 10th and 11th, we carried a press of sail, to get off the land; the wind then drew round by the south, and a succession of baffling weather ensued, which prevented our doing any thing on the coast...
Posted by Arborfield at 06:50