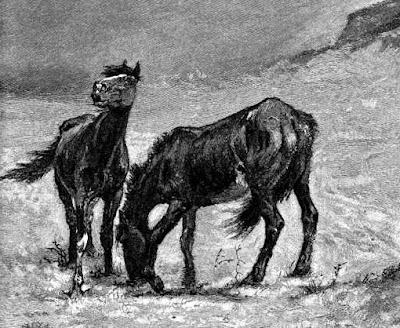 Patagones to Buenos Ayres
On the 5th a party of a hundred men were sent against them. These Salinas only lie a few leagues out of the road between the Colorado & Bahia Bianca. The Chasca (or express) who brought this intelligence, was a very intelligent man & gave me an account of the last battle, at which he was present.
Some Indians, taken previously, gave information of a tribe North of the Colorado. Two hundred soldiers were sent. They first discovered the Indians, by the dust of their horses, in a wild mountainous country. My informer thought they were half as high as the Sierra Ventana, therefore between 1 & 2000 feet high. The Andes were clearly in sight, so that it must have been very far in the interior.
The Indians were about 112, women & childen & men, in number. They were nearly all taken or killed, very few escaped. Only one Christian was wounded. The Indians are now so terrified that they offer no resistance in body; but each escapes as well as he can, neglecting even his wife & children. The soldiers pursue & sabre every man. Like wild animals however they fight to the last instant. One Indian nearly cut off with his teeth the thumb of a soldier, allowing his own eye to be nearly pushed out of the socket. Another who was wounded, pretended death with a knife under his cloak, ready to strike the first who approached. My informer said, that when he was pursuing an Indian, the man cried out "Companèro (friend) do not kill me," at the same time was covertly loosening the balls from round his body, meaning to whirl them round his head & so strike his adversary. "I however struck him with my sabre to ground, then got off my horse & cut his throat."
This is a dark picture; but how much more shocking is the unquestionable fact, that all the women who appear above twenty years old, are massacred in cold blood. I ventured to hint, that this appeared rather inhuman. He answered me, "Why what can be done, they breed so. " Every one here is fully convinced that this is the justest war, because it is against Barbarians. Who would believe in this age in a Christian, civilized country that such atrocities were committed? The children of the Indians are saved, to be sold or given away as a kind of slave, for as long a time as the owner can deceive them. But I believe in this respect there is little to complain of.

In the battle four men ran away together, they were pursued, one was killed, the other three were caught. They turned out to be Chascas (messengers or ambassadors) of the Indians. The Indians were on the point of holding a grand council, the feast of mares flesh was ready & the dance prepared. In the morning the Chascas were to return to the Cordilleras, where there is a great union of the Indians & from whence they were sent. They were remarkably fine young men, very fair, & above 6 feet high, all of them under 30 years old. The three surviving ones of course possessed very valuable information, to extort this they were placed in a line. The two first being questioned; answered, "No se", (I do not know), & were one after the other shot. The third also said "No se" adding, "fine, I am a man & can die". What noble patriots, not a syllable would they breathe to injure the united cause of their country! The conduct of the Cacique has been very different; his life will perhaps be spared, & he has confessed all the plans; & betrayed the point of union in the Andes. It is said there are already six or seven hundred together & that there will be in Summer time twice that number. Embassadors were to have been sent from this tribe to the Indians at the small Salinas near Bahia Bianca, whom I mentioned that this same Cacique had betrayed. The communication therefore extends from the Cordillera to the East coast. General Rosas's plan is to kill all stragglers & thus drive the rest to a common point. In the summer, with the assistance of the Chilians, they are to be attacked in a body, and this operation is to be repeated for three successive years. I imagine the summer is chosen as the time for the main attack, because the plains are then without water, & the Indians can only travel in particular directions. The escape of the Indians to the South of the Rio Negro, where in such a vast unknown country they would be safe, is prevented by a treaty with the Tehuelches to this effect, that Rosas pays them so much to slaughter every Indian who passes to the South of the river, but if they fail in doing this, they themselves shall be exterminated. The war is chiefly against the Indians near the Cordillera; for many of the tribes on this Eastern side are fighting with Rosas. The general however, like Lord Chesterfield, thinking that his friends may in a future day become his enemies, always places them in the front ranks, so that their numbers may be thinned.

If this warfare is successful, that is if all the Indians are butchered, a grand extent of country will be gained for the production of cattle: & the values of the R. Negro, Colorado, Sauce will be most productive in corn. The country will be in the hands of white Gaucho savages instead of copper-coloured Indians. The former being a little superior in civilization, as they are inferior in every moral virtue. By the above victory, a good many horses were recovered, which had been stolen from B. Blanca. Amongst the captive girls, were two very pretty Spanish ones, who had been taken by the Indians very young & now could only speak the Indian language. From their account, they must have come from Salta, a distance in a straight line of nearly one thousand miles. This gives one a grand idea of the immense territory over which the Indians can roam.

Great as it is, in another half century I think there will not be a wild Indian in the Pampas North of the Rio Negro. The warfare is too bloody to last; The Christians killing every Indian, & the Indians doing the same by the Christians.

I also heard some account of an engagement which took place, a few weeks previously to the one mentioned, at Churichoel. This is an island 70 leagues up the R. Negro & very important as being a pass for horses. A division of the army has at present its head quarters there; when they first arrived, they found a tribe of Indians & killed between twenty & thirty men. The Cacique escaped in a manner which astonished every one. The chief Indians always have one or two picked horses, which they keep ready for any urgent occasion. On one of these, an old white horse, the Cacique sprung taking with him his little son; the horse had neither saddle or bridle; to avoid the shots, the Indian rode in the peculiar method of his nation namely an arm round the horses neck & one leg only on the back; thus hanging on one side, he was seen patting the horses head & talking to him.

The pursuers urged every effort in the chase; the Commandante three times changed his horse. But it all would not do. The old Indian father with his son escaped & were free. What a fine picture can one form in ones mind;. the naked bronze like figure of the old Indian with his little boy, riding like a Mazeppa on the white horse, thus leaving far behind the host of his pursuers.
I saw one day a soldier striking fire with a piece of flint; which I immediately recognized as having been a part of the head of an arrow. He told me it was found near the island of Churichoel, & that they were frequently picked up there. It was between two & three inches long, & therefore twice as large as those used in Tierra del Fuego; it was made of opake cream-coloured flint, but the point & barbs had been intentionally broken off. It is well known that no Pampas Indians now use bows & arrows; I believe a small tribe in Banda Oriental must be excepted, but they are widely separated from the Pampas Indians & border close to those tribes which inhabit the forest & live on foot.
It appears therefore to me that these heads of arrows are antiquarian relics of the Indians before the great changes in habit consequent on the introduction of horses into South America. This & the invention of catching animals with the balls would certainly render the use of arrows in an open country quite superfluous.

In N: America bones of horses have been found in close proximity to those of the Mastodon; and I at St Fe Bajada found a horses tooth in the same bank with parts of a Megatherium; if it had not been a horses tooth, I never should have for an instant doubted its being coeval with the Megatherium. Yet the change of habits, proved by the frequency of the arrow heads, convinces me that the horse was not an original inhabitant.
Posted by Arborfield at 08:06