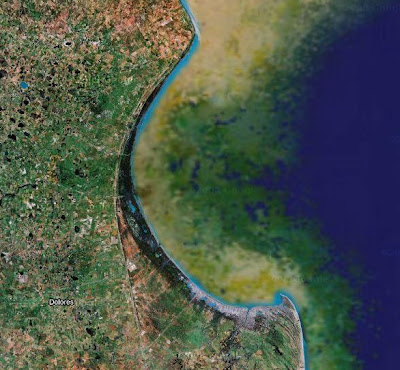 ... the Beagle sailed on the 23d, and after a close examination of Cape San Antonio and the great mud-bank, called Tuyu, which lies within it, we went to the neighbourhood of Cape Corrientes, and there looked about and sounded in every direction, but could find no shoal. We then returned to the river, and sounded Sanborombon Bay, laying its shores down on the chart as accurately as we could, considering that the water was every where so shoal, that even a boat could not get within half a mile of the land, except at particular times, for which we could not wait. The distance at which the Beagle was obliged to keep, varied from four miles to three (seldom less), and then she was sailing in about a foot more water than she drew.*

* The Beagle's draught of water was eleven feet and a half forward, and thirteen feet aft, when in ordinary loaded trim
Posted by Arborfield at 09:11

Welcome Karen... nice to have you 'on board'