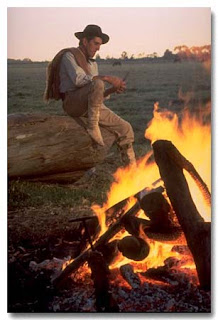 Tapalguen
To the 9th Posta, followed the course of the R. Tapalguen, very fertile country. Tapalguen itself or the town of Tapalguen is a curious place. It is a perfectly flat plain, studded as far as the eye reaches with the Toldos or oven like huts of Indians. The greater part of the families of the men with Rosas live here. There are immense herds of horses & some sheep. We met & passed many young Indian women, riding by two's & three's on the same horse. These & many of the young men were strikingly handsome; their fine ruddy colour is the very picture of health. Besides the Toldos there are three Ranchos, one with a Commandante, & two others Pulperia's or shops.

We here bought some biscuit. I had now been several days without tasting anything except meat & drinking mattee. I found this new regimen agreed very well with me, but I at the same time felt hard exercise was necessary to make it do so. I have no doubt that the Gauchos living so much on meat is the cause that they, like other carnivorous animals, can go a long time without food & can withstand much exposure. I was told that some troops from Tandeel were in pursuit of some Indians, & that for three days they neither tasted water or food. What other troops would not have killed their horses?

To the 10th Posta; plain, partly swamp & partly good to the East of the R. Tapalguen.
Posted by Arborfield at 07:25