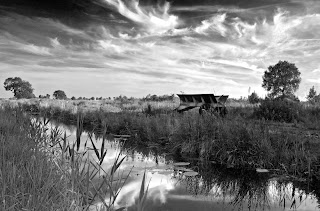 [Cottenham Fen]
Sierra Tapalken
To the 6th Posta; soil black & very soft, generally covered with long coarse herbage; laborious travelling. Rancho here very neat; the posts & rafters were made by a dozen dry stalks bound together with thongs of hide, by the aid of these Ionic looking columns the sides & roof were thatched with reeds. To the 7th Posta, country improving, like Cottenham Fen in Cambridgeshire, a great abundance of beautiful wild fowl. This posta is close to the Southern base of Sierra Tapalken; which Sierra is a low broken ridge of Quartz rock. 2 or 300 feet high, extending to the East to Cape Corrientes, but no great distance within the Interior. I was here told a fact, which, if I had not partly ocular proof, I could not credit. That in the previous night there had been a hailstorm (I saw lightning to the North) & that the pieces of ice were as large as small apples & very hard. They fell with such force as to kill almost all the small animals. These men had already found twenty deers & I saw their fresh hides; one of the party a few minutes after my arrival, brought in seven of them; now I well know that one man without dogs would hardly kill 7 in a week; They thought they had seen about 15 dead ostriches; part of one I eat, likewise saw a large partridge with great black mark on its back, where it had been struck. Many ducks & hawks were killed & ostriches were then running about, clearly evidently blind in one eye. My informer received a severe cut upon the head. This extraordinary storm extended was up but for a short distance.
.
To the 8th Posta; galloped very fast over an extremely fine grass plain. Arrived at the Posta on the R. Tapalguen after it was dark. At supper I was suddenly struck with horror that I was eating one of the very favourite dishes of the country, viz a half formed calf long before its time of birth. It turned out to be the Lion or Puma; the flesh is very white & remarkably like Veal in its taste. Dr Shaw was laughed at for stating that "the flesh of the Lion (of Africa) is in great esteem, having no small affinity with veal, both in colour, taste & flavour". Yet the Puma & Lion are not, I believe, closer allied than any other two of the Cat genus. The Gouchos differ much whether the Jaguar is good eating; but all agree that the Cat is excellent.
.
Captain Fitzroy’s Journal:
(from 11th September) ... our doing any thing on the coast, and also hindered our reaching the Plata until the 16th, on which day we ran up to Monte Video, and anchored.
Posted by Arborfield at 07:47