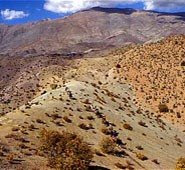 Patagones to Buenos Ayres
Having at last obtained a Vacciano & passport for government horses from General Rosas, I started for Buenos Ayres. — The distance is about 400 miles. — The weather was favourable, but remarkably hazy; I thought it the forerunner of a gale, but the Gauchos tell me it is the smoke from the camp at some great distance being on fire. — To the first Posta 4 leagues, the plain without any bushes but varied by values. — The 2d Posta is on the R Sauce, a deep, rapid little river, not above 25 feet wide. It is quite impassable here & the whole distance to the sea, & forms by this means a useful barrier against the Indians. Where the road crosses it, about a league further up, the water does not reach to the horses belly. The Jesuit Falkner, whose information, drawn from the Indians, is generally so very correct in his map, makes it a great river, sea arising in the Andes. — I think he is right, — for the soldiers say, that in the middle of summer, there are floods, at the same time with the Colorado; if so it is clear there must be a channel for the snow water, although it is probably dry during the greater part of the year.
.
The valley of the Sauce, appears very fertile, it is about a mile wide, there are large tracts of a wild Turnip much resembling the European, they are good to eat but rather acrid. — I arrived here in the afternoon, & getting fresh horses & a guide started for the Sierra de la Ventana. — The distance was about 6 leagues, & the ride interesting, as the mountain began to show its true form. — I do not think Nature ever made a more solitary desolate looking mountain; it well deserves the name of Hurtado or separated. — its height, calculated by angular measurement from the ship, is between 3 & 4000 feet, — it is very steep, rough & broken. — It is so completely destitute of all trees, that we were unable to find even a stick to stretch out the meat for roasting, our fire being made of dry thistle stalks. — The strangeness of its appearance chiefly is caused by its abrupt rise from the sea-like plain, which not only comes up to the foot of the mountain, but separates the parallel ridges or chains. — The uniformity of the colouring gives gre extreme quietness to the view. — The whitish-grey of the quartz rock & the light brown colour of the withered grass of the plain is unbroken by the brighter tints of a single bush.
.
When we arrived at the foot of the main chain, we had much difficulty in finding water; & were afraid we should pass the night without any; it seems that all the streamlets, after flowing a few hundred yards in the plain bury themselves; at last we found some, it was then growing dark & we bivouacced for the night. — The night was very clear & cold, the dew, which in the early part wetted the yergas of the Recado, was in the morning ice. — The water in the kettle was also a solid block. — The place where we slept could not I think have been more than 700 feet above level of the sea, so that I suppose the neighbourhead of the mountain caused this unusual degree of cold. — The highest part of the Sierra is composed of four peaks in a gradually lowering order. — The two highest of these can alone be seen from Bahia Blanca. — To this part a ridge or saddle back appears to join, — our halting place was at the foot of this.
Posted by Arborfield at 07:36