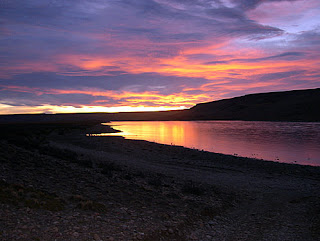 R. Santa Cruz
In the morning, tracks of a party of horses & the long spear or Chusa which trails on the ground, were found; they were so fresh that it was generally thought they must have reconnoitred us during the night. Shortly afterwards we came to a place where there were fresh footsteps of men, dogs, children & horses at the edge of the river & beneath the water; on the other side of the river there were also recent tracks & the remains of a fire: it is very clear that this is the place where the Indians cross, it must be both a difficult & dangerous passage. The Spaniard who lives with the Gregory Bay indians told me that they crossed in the manner which the Gauchos call "a pilota"; that is the corners of a hide are tied up & thus a sort of canoe is made which generally is pulled over by catching hold of the horses tail.

After a mile or two beyond this there were for many days no signs of men or horses. We saw however fresh smoke of the party whom we left behind, from which I think they never saw us, but that we accidentally passed within a day or two's march of each other. The Spaniard told me he believed there were no, or very few Indians at S. Cruz; perhaps they are the same small tribe which occasionally frequent Port Desire, & whose lame horse was seen up the river.

A Guanaco was found dead under water, but in a shallow place; the meat was quite fresh: upon skinning its head, a bruise was found, we imagine that the Indians must have struck it with their balls & that going to the water to drink, it died. Whatever its end might have been, after a few doubtful looks it was voted by the greater number better than salt meat, & was soon cut up & in the evening eat.
Posted by Arborfield at 08:48