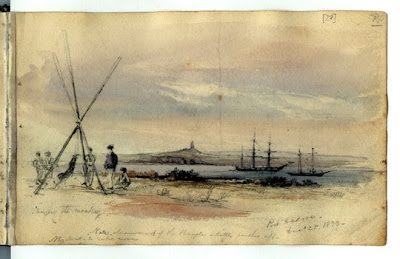 
The sky is painted in purplish-blue, with some indication of cirrus clouds in the top centre, and cumulo-cirrus in mid height; there is a brownish haze nearer the horizon, especially from the left centre to the right of the picture. Much of the foreground is blank, though in the centre brown earth is shown, with the impression of a couple of very small shrubs, behind which the ground is sandy. In the left midground, above the annotation, a large tripod stands, seemingly made from oars, which project upwards to twice the height of the point where they are lashed together. The base of the triangle is approximately equilateral, the sides measuring about 2.5m. Around the tripod there are six figures, four standing, two near the rightmost apex, one each near the others. The rightmost of these standing figures is depicted in colour, wearing white trousers and a blue-fronted jacket with a dark or black back. Behind this figure is the fifth figure, seated; and the sixth figure is hanging on rope by the ankles from the join of the tripod; he is wearing black trousers, and his head and torso are possibly covered in a sack. Behind and to the right of the tripod and group of figures, vegetation is shown at the water's edge, uncoloured at its left-hand end, brown in its central portion, dark brownish grey at its right-hand end. There is a similar group of dark plants in the right centre of the picture, behind the stretch of sandy ground. The whole width of the midground is occupied by calm blue water, paler to the left, darker in the area to the right of the picture where the Beagle is moored to the left of the Adventure, both shown side-on facing right, with some detail in the depiction of the masts and rigging, there being no sails visible. In the background, land appears behind a far shore, vaguely indicated on the left and right behind the figures and boats, shown in more detail in the centre, where a low rocky shoreline is discernible, with a larger hill behind it. Its surface seems covered with vegetation, including what may be a tall tree or small group of trees on its summit. The rocky shoreline in the background is painted brownish-purple, with some darker patches; the hillsides are a greyish green, this colour continuing to the right-hand edge of the picture. A faint purplish-blue outline suggests more distant elevated relatively flat land on the horizon stretching from the centre to the right of the picture. Annotations in the lower right read: "The whole landscape of a rich brown green with purples and occasional touches of red and yellow on the crags" and "Water very light and dull greenish yellow".

[Back to Darwin, his Letters and Beagle Diary tomorrow]
Posted by Arborfield at 07:26