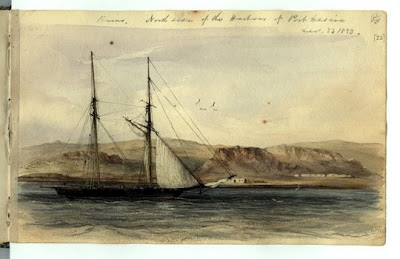 [Ruins, North side of the Harbour of Port Desire Harbour (north side)]

The sky is a faint purpish-blue, with a mix of cumulo-nimbus, cumulus and cumulo-cirrus clouds; in the centre there is a group of four birds in flight. The sun is shining from the left perpendicular to the viewer's line of sight, thus approximately from the west, implying that the sketch was made in the late afternoon. The foreground is occupied by slightly choppy greyish-blue water, which darkens towards the far shore, and in the shadow of the boat shown in the midground left--centre, facing right. The sail in the prow is half raised, the other sails being furled. The two main masts and the rigging are depicted in some detail; to the right of the stern mast we can see the head and shoulders of a seated figure facing to the right, painted brown, and another in the centre of the boat, facing left. In the background, on the far shore immediately to the right of the boat, stands a flat roofed single-storey white building, showing a door and to its right two small windows. There is some indication of small shrubs or rocks to the right of this building. Further to the right and further away, we see a second white building, long and low, with an indistinct indication of a door at its left-hand end and three narrow horizontal windows. In the background behind the buildings, abrupt rocky barren-looking outcrops rise to the height of the horizon, which consists in general of more distant elevated but gentler-contoured land stretching across the whole picture. Directly behind the stern mast of the boat there is a less elevated and less abrupt rocky outcrop. The body of the boat is painted black, the sails a `dirty white', the masts brown. The shore land by the buildings is whitish brown, becoming yellowish-green towards the right-hand edge, the rocky outcrops a mix of greys and browns, while the more distant land in the background is grey and/or sandy-coloured.
.
Conrad Martens' Sketchbooks
Posted by Arborfield at 07:25