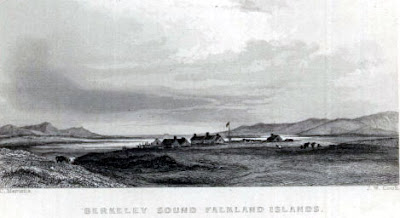 [Berkeley Sound]
Captain Fitzroy’s Journal:
While the Beagle was preparing for sea the body of Lieut. Clive, late of H. M. S. Challenger, was found lying at high-water mark, in an unfrequented part of Berkeley Sound; and the following morning I buried it in a grave on shore, not far from the tomb of our regretted shipmate Hellyer*. After noon, on the same day, we sailed from the Falklands, depressed more than ever by the numerous sad associations connected with their name.