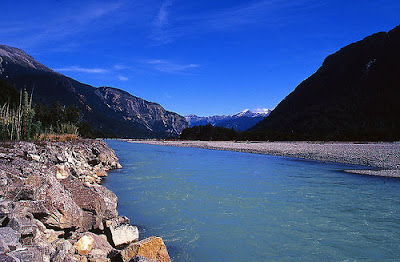 R. Santa Cruz
Before sun-rise, we began our descent. We shot down the stream with great rapidity; generally at the rate of 10 miles an hour; what a contrast to the laborious tracking. We effected in this day what had cost us five days & a half; from passing over so much country, we as it were condensed all the birds & animals together & they appeared much more numerous.

Captain Fitzroy’s Journal:
Early on the 5th we began the rapid descent. Sometimes the wind favoured, and we passed the land at the rate of ten knots an hour; sometimes dangerous places obliged us to turn the boat's head to the stream, pull against it, and so drop down between the rocks. Though easy, the return was far more dangerous than our ascent of the river.

Our first day's work in returning was a distance of eighty-five miles, which had cost us six days hard labour in ascending.
Posted by Arborfield at 08:53