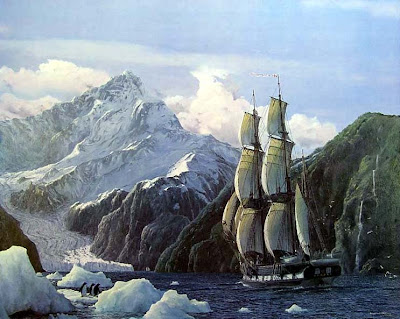 Straits of Magellan
In the morning, in company with the Adventure, we made the best of our way into the open ocean. The Western coast generally consists of low, rounded, quite barren hills of Granite. Sir J. Narborough called one part of it South Desolation, "because it is so desolate a land to behold", well indeed might he say so, outside the main islands, there are numberless rocks & breakers on which the long swell of the open Pacific incessantly rages. We passed out between the "East & West Furies"; a little further to the North, the Captain from the number of breakers called the sea the "Milky way". The sight of such a coast is enough to make a landsman dream for a week about death, peril, & shipwreck.

Captain Fitzroy’s Journal:
We beat to windward through the Cockburn Channel, and would have anchored at night had a safe place offered in time, but as the only cove near us at dusk was a very small one, I preferred leaving that unoccupied for the Adventure, and remaining under way in the Beagle. The night was long and very dark, small rain fell nearly all the time, and squalls from the westward were frequent. There were but four square miles in which it was safe to sail to and fro after dark, and for fourteen hours we traversed that area in every direction. It was necessary to keep under a reasonable press of sail part of the time, to hold our ground against the lee tide; but with the ebb we had often to bear up and run to leeward, when we got too near the islets westward of us. In a case of this kind a ship is so much more manageable while going through the water than she is while hove-to, and those on board are in general so much more on the alert than when the vessel herself seems half asleep, that I have always been an advocate for short tacks under manageable sail, so as to keep as much as possible near the same place, in preference to heaving-to and drifting.
Posted by Arborfield at 06:59

love the penguins in the painting looking on with curiosity