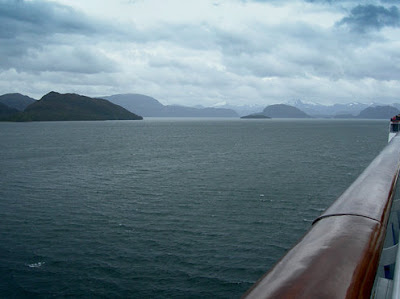 [A modern view of the entrance to the Straits]

Port Famine
The Adventure rejoined us, after having examined the East side of this part of the Straits.

The weather has during the greater part of the time been very foggy & cold; but we were in high luck in having two clear days for observations. On one of these the view of Sarmiento was most imposing: I have not ceased to wonder, in the scenery of Tierra del Fuego, at the apparent little elevation of mountains really very high. — I believe it is owing to a cause which one would be last to suspect, it is the sea washing their base & the whole mountain being in view. I recollect in Ponsonby Sound, after having seen a mountain down the Beagle Channel, I had another view of it across many ridges, one behind the other. — This immediately made one aware of its distance, & with its distance it was curious how its apparent height rose. The Fuegians twice came & plagued us. — As there were many instruments, clothese &c & men on shore, the Captain thought it necessary to frighten them away. — The one time, we fired a great gun, when they were a long way off; it was very amusing to see through a glass their bold defiance, for as the shot splashed up the water, they picked up stones in return & threw them towards the ship which was then about a mile & a half off. — This not being sufficient, a boat was sent with orders to fire musket balls wide of them. — The Fuegians hid themselves behind the trees, but for every discharge of a musket they fired an arrow. These fell short of the boat; & the officer pointing to them & laughing made the Fuegians frantic with rage (as they well might be at so unprovoked an attack); they shook their very mantles with passion. — At last seeing the balls strike & cut the trees, they ran away; their final decampement was effected by the boat pretending to go in chase of their canoes & women. Another party having entered the bay was easily driven to a little creek to the north of it: the next day two boats were sent to drive them still further; it was admirable to see the determination with which four or five men came forward to defend themselves against three times that number.
As soon as they saw the boats they advanced a 100 yards towards us, prepared a barricade of rotten trees & busily picked up piles of stones for their slings. — Every time a musket was pointed towards them, they in return pointed an arrow. — I feel sure they would not have moved till more than one had been wounded. This being the case we retreated. We filled up our wood & water; the latter is here excellent. The water we have lately been drinking contained so much salt that brackish is almost too mild a term to call it. — Amongst trifling discomforts there is none so bad as water with salts in it: when you drink a glass of water, like Physic, & then it does not satisfy the thirst. Mere impure, stinking water is of little consequence: especially as boiling it & making tea generally renders it scarcely perceptible.
Posted by Arborfield at 07:34