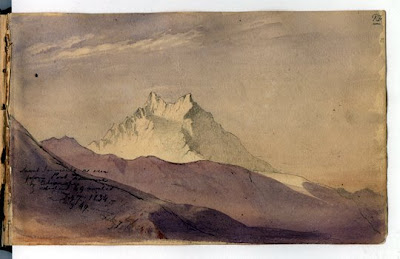 [Mount Sarmiento as seen from Port Famine by telescope distant 49 miles from Conrad Martens' Sketchbooks]
.
S. Cruz to Port Famine
Arrived at Port Famine. I never saw a more cheer-less prospect; the dusky woods, pie-bald with snow, were only indistinctly to be seen through an atmosphere composed of two thirds rain & one of fog; the rest, as an Irishman would say, was very cold unpleasant air. Yesterday, when passing to the S. of C. Negro, two men hailed us & ran after the ship; a boat was lowered & picked them up. They turned out to be two seamen who had run away from a Sealer & had joined the Patagonians. They had been treated by these Indians with their usual disinterested noble hospitality. They parted company from them by accident & were walking down the coast to this place to look out for some vessel. I dare say they were worthless vagabonds, but I never saw more miserable ones; they had for some days been living on Muscles &c & berries & had been exposed night & day to all the late constant rain & snow. What will not man endure!
Syms Covington Journal:
June 1st am anchored Port Famine. During our stay here, we caught an immense quantity of very fine smelt with A seine, which if home, WE supposed to be worth a hundred pounds. Yet this was caught in one day. Near here is the River Sedger, the largest freshwater river in Tierra del Fuego. I went with others upstream a considerable way; the water became very shallow a short distance up, not deep enough for a boat; to walk on its banks was very bad (that is, difficult), by reason of the numberless fallen trees, deep mud, and thickets. The latter is impenetrable in many places, which obliged us frequently to go into the woods to seek for better roads. To water ship in this port, is to send boats at high water, as the water is at the very bottom of the Bay; at ebb tide the bay IS very shallow.
Posted by Arborfield at 07:05