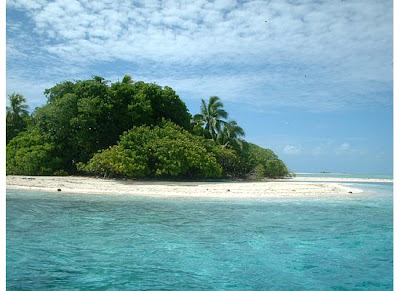 The Low Islands
By the evening of this day we succeeded in passing through the whole of the Archipelago, sometimes called the Dangerous or that of the Low Islands. At daylight & Noon we partially ascertained the figure & position of two Islands which are not placed in the charts. — These & others have a very uninteresting appearance; a long brilliantly white beach is capped by a low bright line of green vegetation. This stripe on both hands rapidly appears to narrow in the distance & sinks beneath the horizon. — The width of dry land is very trifling: from the Mast-head it was possible to see at Noon Island across the smooth lagoon to the opposite side. This great lake of water was about 10 miles wide.

Captain Fitzroy’s Journal
After having passed some anxious nights in very squally weather, we were gratified by seeing an islet whose existence we had not suspected. Tairo is the name by which it is known to the islanders of the archipelago. A few hours afterwards we ranged along the shore of another and much larger island, or rather group of islets, till then not laid down in any chart, the native name of which is Cavahi. We saw a number of islets covered with cocoa-nut trees, surrounding a lagoon; but could not delay to examine the south side, because we had been so unexpectedly detained by contrary winds, and I was very anxious about the chronometer measurement, the interval being already considerable.

Hastening on, therefore, we passed between the Elizabeth and Wittgenstein (or Faarava) groups, which are similar to Cavahi in appearance, and carried a press of sail to reach the Society Islands. It was singular that directly we were clear of the Low Islands, we got into a steady trade-wind, such as we had enjoyed before seeing Honden Island; and were no more troubled by westerly wind, or squalls, till long after we had left Otaheite and were approaching near New Zealand.
Posted by Arborfield at 07:40