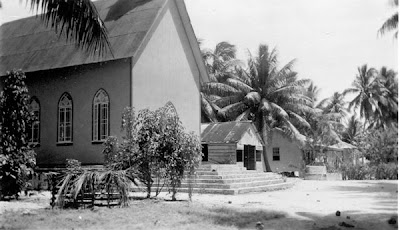 [A Tahitian church in 1938]
Tahiti
The harbor of Papiete, which may be considered as the capital of the Island, is about seven miles distant from Matavai, to which the Beagle had returned. — The Queen resides there, it is the seat of Government & chief resort of shipping. — Capt. FitzRoy took a party there in the morning to hear divine service in the Tahitian language & afterwards in our own. — Mr Pritchard the leading Missionary in the Island performed service. — Mr Pritchard was regularly educated in the mission college; he appears a sensible agreeable gentleman & good man. — I have already mentioned with respect Mr Wilson. The third Missionary whom we have seen is Mr Nott, who has resided 40 years on the Island. — His occupations are chiefly literary, & has now finished his great task of translating the whole bible. — He bears universally a high & respectable character. — The characters of this class of men have been so frequently attacked, that I have mentioned my opinion on the three who reside in this vicinity. We met at Mr Pritchards house three young ladies, daughters of Missionaries, who were here on a visit. Their appearance & manners showed that they had been properly educated. It was curious to see those who could not be distinguished in appearance from our countrywomen, speaking the Tahitian language with even greater fluency than English. — Even the characters of these quiet young women have not escaped the bitter attacks of the enemies of the Missionaries. — Before reaching these islands, from the varying accounts I had read I felt great interest to form from my own eyes a judgment of their moral state, although such judgment would necessarily be imperfect. — The first impression on any subject very much depends on ones previously acquired ideas. — Mine were drawn from Ellis' Polynesian Researches; an admirable & most interesting work, but naturally looking at everything under a favourable point of view; from Beechey, neutral; & Kotzebue, strongly adverse. — He who compares these three accounts will I think form a tolerably accurate conception of the present state of Tahiti.

One of my impressions, which I took from the two last authorities, was decidedly incorrect: viz that the Tahitians had become a gloomy race & lived in fear of the Missionaries. Of the latter feeling I saw no trace, without indeed fear & respect are confounded under one name. — Instead of discontent being a common feeling, it would be difficult in Europe in a crowd to pick out half so many merry, happy faces. — The prohibition of the Flute & dancing is inveighed against as wrong & foolish. — the more than Presbyterian manner of keeping the Sabbath is looked on in a similar view. I will not pretend to offer any opinion on this subject against men who have resided as many years as I have days in the Island. On the whole it is my opinion that the state of morality & religion is highly creditable. — There are many who attack even more acrimoniously than Kotzebue, both the Missionaries, their system & the effect produced. — Such reasoners never compare the present to the former state only twenty years before; nor even to that of Europe in this day, but to the high standard of Gospel perfection. — They expect the Missionaries to effect what the very Apostles failed to do.

By as much as things fall short of this high scale, blame is attached to the Missionaries, instead of credit for what has been effected. They forget or will not remember that human sacrifices & the power of an idolatrous priesthood, — a system of profligacy unparalleled in the world, & consequent infanticide as part of that system, — bloody wars where the conquerors spared neither women or children have been abolished; that dishonesty, intemperance & licentiousness have been greatly reduced by the introduction of Christianity. — It is base ingratitude in a Voyager to forget these things; at the point of Shipwreck on some unknown coast he will most devoutly pray that the lesson of the Missionary may have extended thus far.

In their morality, the virtue of the women is said to be most open to exception; but before they are blamed too severely, it will be well distinctly to call to mind the scenes described by Capt. Cook & Mr Banks in which the grandmothers & mothers of the present race played a part. Those who are most severe should consider how much of the morality in Europe is owing to the system early impressed by mothers on their daughters & how much in each individual case to the precepts of religion. — But it is useless to argue against such men; I believe that disappointed at not finding the field of licentiousness quite so open as formerly, they will not give credit to a morality which they do not wish to practice, or to a religion which they undervalue, if not despise.

The Tahitian service was a very interesting spectacle. — The Chapel is a large airy framework of wood; it was filled to excess by tidy clean people of all ages & sexes.— I was rather disappointed in the apparent degree of attention; but I believe my expectations were raised too high. — Anyhow the appearance was quite equal to that in a country Church in England. — The singing of the hymns was decidedly very pretty; the language however from the pulpit, although fluently delivered had not much euphony: a constant repetition of sounds like "tata, ta, mata mai", rendered it monotonous. — After English service, a party returned on foot to Matavai; — it was a pleasant walk either along the sea-beach or under the shade of the many beautiful trees.

Captain Fitzroy’s Journal
Early this morning a party went with me to Papiete, and others went to Mr. Nott's church, while those who could not go far from the ship attended Mr. Wilson, to hear as well as see the natives at divine service. At Mr. Pritchard's church we found an orderly, attentive, and decently dressed congregation. I saw nothing "grotesque," nothing "ludicrous," nor anything which had a tendency to "depress the spirits," or "disappoint one's expectations."

The church was quite full and many were sitting outside; I suppose six hundred people were present besides children, who, like others of their happy age, required an occasional touch with the white wand of a most stern looking old beadle, to prevent their chattering to one another about the strangers, and their 'money.'

Mr. Pritchard's fluent delivery in the native language surprised and pleased us much. The greater part of the natives were very attentive. Two were making notes upon paper, of the subject of his discourse. A few were careless, but only a very few; and their eye-wanderings were caused chiefly by the strangers in uniform. Where is the English congregation of five or six hundred persons, in which a captious observer could not occasionally detect inattention to the clergyman? Hymns were sung with much propriety, and a very pleasing musical effect. The language is so soft and so full of vowels, that the good voices and very correct ears of the natives succeed admirably in hymns. After the service in the native language had ended, we repaired to the English chapel with Mr. Pritchard, who performed divine service in the manner of the Independents. Occasional visitors from ships at the island, and the few European residents who are within reach, frequent this chapel.

It was certainly better to suppress altogether, rather than only to restrain and alter their former licentious amusements, but it seemed to me that some kind of innocent recreation was much wanted by these light-hearted islanders. There is a void in the mind where a naturally thoughtless and volatile disposition exists, which it is extremely difficult to fill with serious thoughts of any duration. To such minds "a quiet reflecting day," (as my respected and much lamented messmate in the Thetis, the Rev. Henry Hall, used to term Sunday), is, in a great measure, a vacant time of leisure, which if not occupied by innocent thoughts which interest without doing harm, is certain to be seized upon by evil imaginations and bad passions.

During the time we passed in the churches it was sufficiently plain that there was no harshness usually shewn towards the children: for they clustered round their minister so closely when he moved about, that he was obliged to push them away, good naturedly, several times. From the manner of elderly, as well as young natives, I should conclude that "Pritate," as they called Mr. Pritchard, was a favourite.
Posted by Arborfield at 07:06