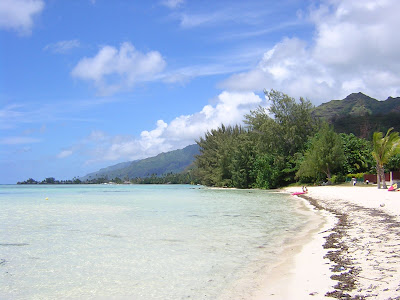 Tahiti
Before breakfast the ship was hemmed in by a flotilla of canoes, & when the natives were allowed to come on board, I suppose the number could not have been less than 200 on our decks. It was the opinion of every one, that it would have been difficult to have picked out an equal number from any other nation who would have given so little trouble. — Every body brought something for sale; shells were the main article of trade. — The Tahitians now fully understand the value of money & prefer it to old clothes or other articles. — The various coins of English & Spanish denomination puzzle the inhabitants & they never seem to think the small Silver quite secure until changed into dollars. — Some of the chiefs have accumulated considerable sums of money; one not long since offered 800 $ for a small vessel & frequently they purchase horses & whale-boats at from 50–100 $.

After breakfast I went on shore & ascended the slope of the nearest part of the mountains to an elevation between two and three thousand feet. — The form of the land is rather singular & may be understood by explaining its hypothetical origin. I believe a group of the interior mountains stood as a smaller island in the sea, & around their steep flanks streams of Lavas & beds of sediment were accumulated in a conical mass under water. This after having been raised was cut by numerous profound ravines, which all diverge from the common centre; the intervening ridges thus belonging to one slope & being flat-topped. — Having crossed the narrow girt of inhabited land, I followed the line of one of these ridges; having on each hand very steep & smooth sided valleys. — The vegetation is singular, consisting almost exclusively of small dwarf fern, mingled higher up with coarse grass. — The appearance was not very dissimilar from that of some of the hills in North Wales; and this so close above the orchard of Tropical plants on the coast was very surprising. At the highest point which I reached trees again appeared. — The wood here was very pretty. — tree ferns having replaced the Cocoa Nut. — It must not however be supposed that these woods at all equalled the forests of Brazil. — In an island, that vast number of productions which characterize a continent cannot be expected to occur.

From this point, there was a good view of the distant island of Eimeo, dependant on the same Sovereign with Tahiti. — On the lofty & broken pinnacles white massive clouds were piled, which formed an island in the blue sky, as Eimeo itself in the blue ocean. The island is completely encircled by a reef, with the exception of one small gateway; at this distance a narrow but well defined line of brilliant white where the waves first encountered the wall of coral, was alone visible; Within this line was included the smooth glassy water of the lagoon, out of which the mountains rose abruptly. — The effect was very pleasing & might be aptly compared to a framed engraving, where the frame represents the breakers, the marginal paper the lagoon, & the drawing the Island itself. — When I descended in the evening from the mountain, a man whom I had pleased with a trifling gift met me bringing with him hot roasted Bananas, a pineapple & Cocoa Nuts. — I do not know anything more delicious than the milk of a young Cocoa Nut, after walking under a burning sun. — The pineapples here are also of such excellence as to be better than those reared in England & this I believe to be the last & highest compliment which can be paid to a fruit or indeed anything else. — Before going on board I went to Mr Wilson, who interpreted to my friend who had paid me so adroit an attention, that I wanted him & some one other man to accompany me on a short excursion into the mountains.

Captain Fitzroy’s Journal
I was fully occupied in making observations upon the spot where once stood Cook's observatory, a classical, and to us, important place. Upon the situation of this celebrated point, Venus, depend most of the geographical positions of islands in the South Sea; and its locality upon our globe has been deemed well known. Messrs. Wales, Green, and Bayley are particularly entitled to the greatest share of credit for having by their observations attained to so great a degree of accuracy.

While we were engaged with the instruments on shore, a crowd of natives were eagerly displaying their merchandise along side or on board the ship. From the dawn of day, until they were admitted at breakfast time, canoes had been approaching from every direction. Their occupants had heard of the dollars, and every canoe within reach had been loaded. This sort of competition could not last; so I thought it better to give them as much opportunity to dispose of their wares as our small deck allowed; and desired Lieut. Wickham to let the market be held till trade grew dull. Some wanted to build us a house; many asked to be allowed to wash our clothes. There appeared to be no want of will to work, if dollars were to be gained.

On shore it was difficult to make the required observations, among a crowd of curious observers of ourselves and our instruments; for though they readily drew back as far as we wished, it was quite impossible to keep them from running about and shaking the ground. While employed with the dipping needle under a tent, I thought myself fortified: but they besieged the small opening so closely, in their eagerness to see the sight, that the heat caused by a vertical sun was soon increased to that of an oven, from their thus blocking up the only air-hole.

At my return to the ship in the evening, I found that the fair had not lasted above an hour after breakfast. All the natives had behaved well excepting two; one of whom absconded with the top of a brass stanchion. The other tried to carry off an axe; but was detected, and pointed out to the more respectable of his countrymen, who said he should be tried, and that his sentence would probably be a fine of ten hogs.

This evening some of our party were much pleased by hearing the pretty plaintive songs of the children, as they sat in groups upon the shore. Their voices accord in the most perfect manner; and, although the tunes are rather monotonous, they detained us, sitting upon the sandy beach, till we could stop no longer.
Posted by Arborfield at 06:11