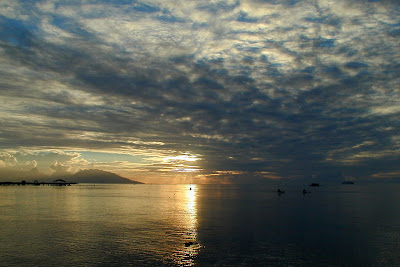 Tahiti
FitzRoy & myself breakfasted with Mr Wilson & afterwards the Beagle got under weigh: from light airs we did not get into Papiete till the evening. Four boats were sent on shore for Her Majesty. The Ship was dressed with flags & the yards manned on her coming on board. — With her came most of the chiefs: the behaviour of all was very proper; they begged for nothing & appeared much gratified by the presents which were given them. — The Queen is an awkquard large woman, without any beauty, gracefulness or dignity of manners. — She appears to have only one royal attribute, viz a perfect immoveability of expression (& that generally rather a sulky one) under all circumstances. — Sky rockets & the Seamens songs appeared to give most amusement. — The Queen remarked that one song, a very noisy comic one, certainly could not be "Hymeni". — The Royal party did not leave us till past midnight: they all appeared well contented with their visit.

Captain Fitzroy’s Journal
At daylight this morning, while the Beagle's crew were unmooring and hoisting in the boats, I went to Mr. Wilson's school-house, then used also as a chapel—the old chapel having been blown down by a violent gale of wind. Divine service (a hymn, a long extempore prayer, and another hymn) was performed. This is the established custom at all the missionary stations at Otaheite on Wednesday mornings: on other mornings one or two hours after daylight are employed in the schools. The congregation was numerous, and very attentive. I noticed that all the principal men of the district, besides Hitote who came from a distant part of the island, were present.

Mr. Wilson's manner pleased me much; it was the sincere, and naturally impressive manner of a kind-hearted, honest man, earnestly performing a sacred and paramount duty. I went to see the new chapel after the morning-service was ended; but only the floor-timbers and the posts for the roof were then fixed in their places. The natives were irregular in their work, sometimes doing much, at others little, just as they felt disposed. Being a voluntary work, they took their time about it.

Mr. Darwin and I breakfasted with Mr. Wilson at his house: it happened that Mr. and Mrs. Henry were about to make a journey to some distance; that a favourite son was undertaking a new and difficult mission at the Navigator's Islands, and that we were both about to take leave of the pious teacher of the heathen: and for each he asked a blessing, in an extempore prayer of some length, the result of unaffected, genuine piety. A kinder, or less exceptionable prayer, so far as I could pretend to judge, than that unprepared one by Mr. Wilson, I could not have wished to hear. That it was unprepared I feel certain, because he had not expected us to be present, and the manner in which our prospects were intermingled with those of the others he mentioned, showed that there was no premeditation. There was no affected expression, or unusual tone: it was the sincere devout manner of a pious plain-spoken man.

When under sail we tried to approach the entrance of Papiete Harbour, but baffling winds prevented our anchoring until three in the afternoon; and then, anticipating the royal visit, we tried to make such preparations as our little vessel could accomplish. Dressing the ship with flags, and preparing to man yards, was all we were able to do: salute we could not, on account of the chronometers.

We were told that the queen had walked to Papawa, distant about two miles, to inspect a quantity of fruit, cocoa-nuts, pine-apples, &c. (which she had ordered to be collected as a present to the man-of-war): and, with our glasses, we saw the royal party hastening along the beach, and in the midst of a number of women, children, and men, the queen was observed advancing at a quick walk. Soon afterwards, when it was supposed she had rested and dressed, we sent the boats. The chiefs were already on board. Mr. Pritchard undertook the troublesome offices of interpreter and master of the ceremonies, and by his assistance we saw the whole party collected on the Beagle's upper deck, while the seamen manned yards, and we all gave the queen three cheers.

A bad dinner, accepted after the four mile walk, in a manner it did not deserve,—was succeeded by a few rockets, blue lights, and false fires,—the only fireworks we possessed. Luckily the rockets were good and gave high satisfaction. Lying in the middle of a bay, whose radius, supposing it semi-circular, may be half-a-mile, our ears were startled by a thrilling outcry of delight echoing around the beach, as each successive rocket rushed into the sky and burst. This outcry from the natives on shore, who were taken by surprise (the night being very dark) showed how much they enjoyed the sight. Our visitors on board, being told what would happen, only repeated 'maitai,' 'maitai,' with earnestness. I much wished then to have had a few good fireworks of a more artificial character. To any one about to visit distant, especially half-civilized or savage nations, let me repeat a piece of advice given to me, but which from inadvertence I neglected to follow: "take a large stock of fireworks."

Some presents to each of our guests helped to amuse them and keep up their cheerfulness. After tea I proposed hearing a few of the seamen's songs,—as some of our crew were very good singers,—not at the time thinking of their prejudices against any singing except hymns. Mr. Pritchard had no word to interpret 'song' but 'himene;' and Rule Britannia, with one or two other grave performances, passed off very well, but, to the perplexing of Mr. Pritchard and surprise of the Otaheitans, a merry comic song was struck up, which obliged Mr. Pritchard to answer the queen's inquiries plainly, by saying, "No, that was not a hymn," it was "sea singing" 'God save the King' sounded more gravely, and suited better.

We landed the party almost at their own doors, and if they were half as well pleased as we were, our little preparations had not been a waste of time and trouble. Their behaviour on board was extremely correct: their habits and manners perfectly inoffensive. No doubt they are improving yearly, and the example of the missionary families has an influence over them, exceeding that of very differently disposed people by whom they are too frequently visited.
Posted by Arborfield at 07:39