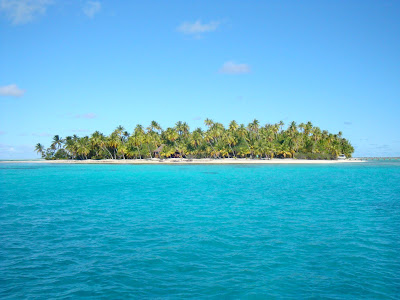 Tahiti
I hired a canoe & men to take me on the reef. — These canoes are from their extreme narrowness comical little boats. — They would immediately be upset if it was not for a floating log of very light wood joined to the canoe by two long transverse poles. — We paddled for some time about the reef admiring the pretty branching Corals. — It is my opinion, that besides the avowed ignorance concerning the tiny architects of each individual species, little is yet known, in spite of the much which has been written, of the structure & origin of the Coral Islands & reefs.*

* Although from his reading, and from his thinking about the consequences of the elevation of the South American continent, CD's theory about the formation of coral reefs had probably already come to him by this time, this was the first reef that he actually saw.

Captain Fitzroy’s Journal
With Mr. Henry (the son of the missionary) a well known chief, 'Hitote,' came on board to share our breakfast. Captain Beechey has introduced him in his work and described his character. Mr. Henry was born upon the island, and had never visited England, yet a more English countenance, or more genuine English ideas, I have seldom met with in any part of the world. From him I received some information, to me very interesting, and to those for whom it was my duty to collect nautical intelligence, I hope useful. Afterwards I hastened to Papiete to pay my respects to Queen Pomare. I was in time to see her arrive from Eimeo, sitting on the gunwale of a whale-boat, loosely dressed in a dark kind of gown, without anything upon her head, hands, or feet, and without any kind of girdle or sash to confine her gown, which was fastened only at the throat. There was no reception at landing: no attendance, no kind of outward ceremony showed that the 'Queen of the Isles' had arrived at her home.

Some time afterwards, when I heard that she was inclined to give an audience, I went to the royal cottage with Mr. Pritchard. A parcel of half-dressed merry looking damsels eyed us with an amusing mixture of shyness and curiosity. These, I concluded, were a part of the 'Queen's mob,' as our interpreter had ignorantly or democratically called the royal attendants. Only a few men were about the house, one of whom was the queen's foster-father ('feeding father' in the Otaheitan language) and another her husband.

Entering a small room, 'Ia-orana Pomare,' with a shake of the hand, was the salutation given by Mr. Pritchard, and by myself, following his example. On the only three chairs in the room we sat down, but the queen looked very uncomfortable, and certainly not at all dignified. I could not help pitying her, for it was evident she was expecting a lecture on the subject of the Truro, and felt her utter helplessness: I was therefore glad, after a few words of compliment, to see her mother, husband, and foster father enter the room, though they sat down upon chests or the floor.

I delivered a letter from Commodore Mason, which she asked Mr. Pritchard to interpret, and sent out to her secretary. A meeting of the chiefs, herself presiding, was proposed and decided to be held on the following day. Some conversation then passed on other subjects, and we took our leave by shaking each individual by the hand. This is certainly preferable to pressing noses, but I was sorry to see that the missionaries had attended but little to the outward demeanour, to the manners, to the attendance, and to the dwelling of the sovereign of a people whose happiness and improvement would certainly be increased by raising the character, and improving the condition of their ruler. While called a queen, Pomare ought to be supported by some of those ceremonious distinctions, which have, in all ages and nations, accompanied the chief authority. That the missionaries should interfere harshly or sweepingly, would doubtless irritate; but a beneficial influence, almost unnoticed except in its effects, might be exerted in these temporal, and seemingly trifling affairs, which might assist hereafter in a day of need.

I have been told that the natives have been very ungrateful to the missionaries. Perhaps they are not all aware what a debt of gratitude they owe. Certainly, the better informed and the older inhabitants understand and appreciate the kindness and the labours of their devoted teachers; but whether the younger or the lightly-disposed have, generally speaking, a kindly feeling towards them I doubt. More temporal enjoyments, and more visible or tangible benefits are asked for by the younger inhabitants, who are daily becoming more aware of the manners and habits of civilized nations. Surely the queen, a young and lively woman, is likely to compare her own habits and personal comforts, and the degrees of attention or deference shown to her, with those of foreigners, either resident in or visiting Otaheite.

Dispensing temporal benefits, with an evident desire to better their condition in every way, excites the gratitude of ignorant minds, and often paves the way towards teaching them to acquire abstract ideas, and to wage war against many of those things which they would rather do than leave undone. There is a Roman Catholic mission at the Gambier Islands, amply provided with presents and property fit for the natives, and it is said that they are succeeding well. At Otaheite the missionaries were afraid that the doctrines of the Roman church would obtain a greater influence, and agree better with the disposition of the natives than the strict discipline in which they have hitherto been held. Unless preventive measures are taken in Europe, religious strife and internal warfare may again be caused in these islands, even by those whose aim is peace. Already there is a remarkable bitterness of feeling on the subject, which is unlikely to diminish if the success of the Roman Catholic mission increases.

But I have wandered away from Pomare—her small ill-furnished room and her awkwardly-contrived house, neither English nor Otaheitan. Before she became sovereign, she was known by the name of Aimatta, which signifies 'eye-eater;'* but Pomare has since been adopted as the royal name. In affixing her signature, 'Vahine' is added, which means 'female'—thus 'Pomare Vahine.' Her husband is a young, intelligent man; but he has no share in the government, being only king-consort. This man was the only native of the island, that I saw, whose nose was sharp and projecting. It is amusing to think that they call a man 'long nose,' in this country, when they wish to wound his feelings deeply.

During the first few days after a child is born, the mother or her attendants keep pressing the back of the infant's head with one hand, and the forehead and nose with the other, to make the head high and the nose and brow flat. Children of the higher ranks undergo more compression, because they are more carefully attended. How the queen's husband escaped, or could be chosen by her with such a nose, I am at a loss to discover.
Posted by Arborfield at 08:14