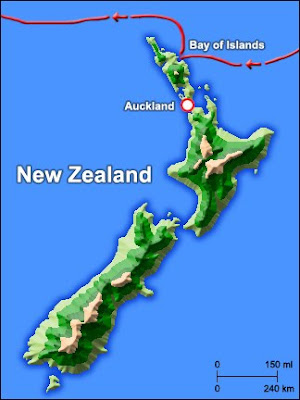 Darwin Beagle Diary
In the evening we saw in the distance New Zealand. — We may now consider ourselves as nearly without the limits of the Pacific Ocean. It is necessary to sail over this great sea to understand its immensity. Moving quickly onwards for weeks together, we meet with nothing but the same blue profoundly deep ocean. Even within the Archipelagoes the Islands are mere specks & far distant one from the other. Accustomed to look at Maps drawn on a small scale, where dots, shading, & names are crowded together, we do not judge rightly how infinitely small the proportion of dry land is to the water of this great sea. — The Meridian of the Antipodes is likewise passed; every league, thanks to our good fortune, which we now travel onwards, is one league nearer to England. These Antipodes call to mind old recollections of childish doubt & wonder. Even but the other day, I looked forward to this airy barrier as a definite point in our voyage homewards; now I find it & all such resting places for the imagination are like shadows which a man moving onwards cannot catch. — A gale of wind, which lasted for some days, has just lately given us time & inclination to measure the future stages in our long voyage of half the world, & wish most earnestly for its termination.

Captain Fitzroy’s Journal
On the 19th we made the northern hills of New Zealand; but tantalized still by adverse winds, all the next day was spent in beating to windward, and not till the 21st could we succeed in obtaining access to the Bay of Islands. We were all a good deal disappointed by the view. After Otaheite, the northern part of New Zealand had, to our eyes, a very ordinary appearance.
Posted by Arborfield at 19:37