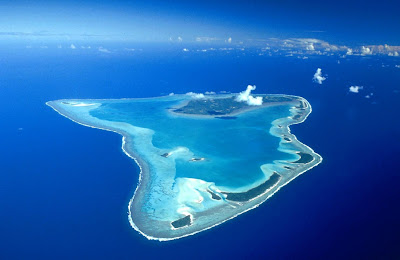 In the Pacific
After several days of light winds, we passed near to the island Whytootacke; We here saw a union of the two prevailing kinds of structure united. A hilly irregular mass was surrounded by a well defined circle of reefs, which in great part have been converted into low narrow strips of land, which as Cook calls them are half drowned, consisting merely of sand & Corall rocks heaped up on the dead part of a former reef. The inhabitants made a smoke to attract our attention.

Captain Fitzroy’s Journal
Easterly winds swept us along a smooth sea for many days, after leaving Otaheite. At daylight on the 3d of December we saw Whylootacke (or Wailutaki) a small group of islets encircled by a coral reef, from four to eight miles in diameter. The principal one is 360 feet high, and nearly four miles long. There was a native missionary upon it, educated at Otaheite.
Posted by Arborfield at 20:32