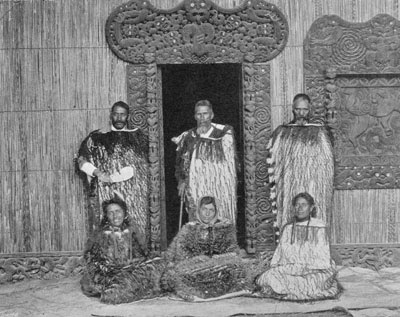 Captain Fitzroy’s Journal
On the following day, Waripoaka visited the Beagle; he was accompanied by a mixed assemblage of men, women, children, pigs, dogs, and fowls, all in one large canoe. His own appearance, a spare figure and tattowed face, ill-dressed in a shabby old suit of European clothes; and the disorderly group in his train, formed an unfavourable outward contrast to the warlike array of a heathen New Zealand chief. Waripoaka seemed to be very intelligent and unassuming; perhaps his manner to white men was too humble. It did not agree with pre-conceived ideas of an independent, haughty New Zealander, to see bows and awkward grimaces (intended for good manners) made by a man whose eye and aspect at once precluded the idea of any approach to refined habits.

During our stay at New Zealand we heard much of the zealous activity of the officers of 'La Favorite'—a French surveying ship—which had lately visited, and made a minute plan of the Bay of Islands. They must have examined every corner and ascended every hill, by the accounts we received; but neither natives nor English settlers seemed able to comprehend the principle which animated Captain La Place and the officers of La Favorite to take so much trouble in a foreign country for no good to themselves alone. I was able to explain this to some of them by instancing my own occupation on the shores of South America, and showing that nations acted upon grander principles than individuals. I was told that M. La Place had likewise examined, with much care, a considerable extent of the eastern sea-coasts of the northern large island (Eaheinomawe, or Yahinomaui).

The term Rangatira, Rangateeda, or Rangatida, has spread among all classes, excepting only the slaves, who are prisoners taken in war or their descendants. Every free Zealander now styles himself rangatira.

At Otaheite there is a very limited number of raatiras, as the secondary chiefs are there called; and each of those so styled is really a person possessing a considerable estate, and having influence over his neighbours. There can be little doubt that originally the words were alike; or rather there was but one word which expressed either 'freeman' or 'privileged person;' and that the first people of New Zealand were animated by the spirit of equality and apparent liberty, which is seen to prevail in most colonies. Is not this the natural spirit of an association of adventurers, whose objects are similar, whose origin, individually, as to birth and place in the parental society does not differ much—if it does, the difference is unnoticed when not upheld by accidental circumstances—and whose property is very similar?

Democratic, essentially democratic, is the present political state of the New Zealanders; and one cannot help pitying their short-sightedness in exposing themselves to the caprice and dissensions of the many who obtain temporary influence, and to the wars, harsh slavery—for in the heathen districts the life of a slave depends upon the caprice of his master—and dreadful consequences. But this shocking existence, so utterly repugnant to our ideas of happiness, excited and still excites the New Zealander to animal enjoyments, and a sort of pleasure resulting from the gratification of his horrible propensities, which is almost incomprehensible to us, however intelligible it may have been to our earlier ancestors. Do not let us entirely forget the painted savages who opposed Cæsar—or the sacrifices of the Druids!

Some of the Zealanders have amulets and other similar trifles hung around their necks. Small uncouth images, much like the Burmese or Chinese 'josses,' formed out of a very hard stone ('jade'?), are so highly prized by them that they are, generally speaking, very reluctant to part with any. I got one from the daughter of Shunghi, but could not obtain a second, though she had several. I was told that they value them as hereditary relics, as well as supposed charms. Many nations, even at the present day, put faith in relics, some more especially in such as have a word or words upon them, which it is supposed the evil spirit would not like to see or to hear, and therefore would avoid. Particular figures and shapes also are considered to be disagreeable to the author of evil and his agents. Surely the New Zealanders must have tried thus to frighten Satan by their hideous images, and by the uncouth, horrible faces which they delight in making. The little images, or amulets of jade, are formed in a similar fashion!

These small idols, or talismans, seem to me to have been cut into the rude likeness of an ape, or a 'ribbed-nosed baboon.'† Yet, excepting the face, they resemble figures of Hindoo gods! What time and pains must have been bestowed in working such hard pieces of stone, unless indeed, a method of acting upon them by fire or chemistry was known; or that when first taken from the ground they were softer.

Besides the use which the natives make of the flax for clothing by day, a mat, coarsely woven of its fibres, is tied at night, or while it rains, round the neck, and forms a sort of thatch, under which the owner squats upon his heels, and, at a little distance, looks very like a bee-hive. The rough tuft of coarse and curly black hair, which shows at the top of the conical roof, does not at all injure the resemblance; and in this manner a great number of the natives pass their nights, especially if there is the least chance of a surprise or attack from an enemy. I was told that they sleep as well in this way as if they were lying down, but I doubt it much, and think that only a part of the whole number at any place, keep watch, or remain ready in this manner, while others sleep lying down, though frequently in the open air. A more watchful way of resting could not well be devised.