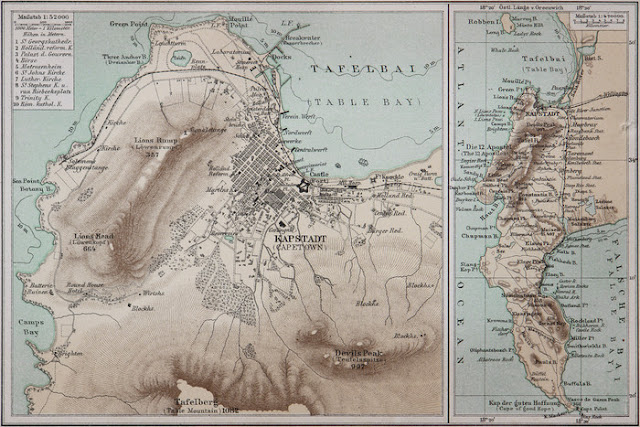 In the morning I walked to a neighbouring hill to look at the town. It is laid out with the rectangular precision of a Spanish city; the streets are in good order & macadamized, & some of them have rows of trees on each side; the houses are all white-washed & look clean. In several trifling particulars the town has a foreign air; but daily it is becoming more English. There is scarcely a resident in the town, excepting among the lowest order, who does not speak some English; in this facility in becoming Anglefied, there appears to exist a wide difference between this colony & that of Mauritius. This however does not arise from the popularity of the English, for the Dutch, as the French at Mauritius, although having profited to an immense degree by the English government, yet thoroughly dislike our whole nation. In the country universally there is one price for a Dutchman, & another & much higher one, for an Englishman; nevertheless some few of the Dutchmen have lately sent their sons to England to learn a proper system of agriculture.
All the fragments of the civilized world, which we have visited in the southern hemisphere, all appear to be flourishing; little embryo Englands are hatching in all parts. The Cape Colony, although possessing but a moderately fertile country, appears in a very prosperous condition. In one respect it suffers like New South Wales, namely in the absence of water communication, and in the interior being separated from the coast by a high chain of mountains. This country does not possess coal, & timber, excepting at a considerable distance, is quite deficient. Hides, tallow & wine, are the chief export, & latterly a considerable quantity of corn. The farmers are beginning also to pay attention to sheep grazing, a hint taken from Australia. It is no small triumph to Van Diemens Land, that live sheep have been exported from a colony of thirty three years standing to this one, founded in 1651.
Posted by Arborfield at 07:35