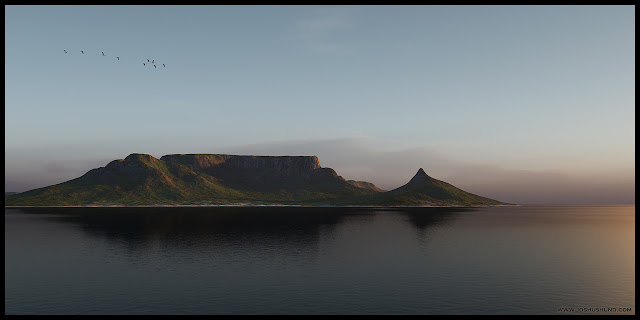 In Cape town it is said the present number of inhabitants is about 15,000, and in the whole colony, including coloured people, 200,000. Many different nations are here mingled together; the Europæans consist of Dutch, French & English, & scattered people from other parts. The Malays, descendants of slaves brought from the East Indian archipelago, form a large body; they appear a fine set of men; they can always be distinguished by conical hats, like the roof of a circular thatched cottage, or by a red handkerchief on their heads. — The number of Negroes is not very great, & the Hottentots, the ill treated aboriginals of the country, are, I should think, in a still smaller proportion. The first object in Cape town which strikes the eye of a stranger, is the number of bullock waggons; several times I saw eighteen & heard of twenty four oxen being all yoked together in one team;2 Besides these, in all parts waggons with four, six, & eight horses in hand, go trotting about the streets.— I have as yet not mentioned the well known Table mountain; this great mass of horizontally stratified sandstone rises quite dose behind the town to a height of 3500 feet; the upper part forms an absolute wall, often reaching into the region of the clouds. I should think so high a mountain, not forming part of a platform & yet being composed of horizontal strata, must be a rare phenomenon; it certainly gives the landscape a very peculiar, & from some points of view, a grand character.
Posted by Arborfield at 05:49