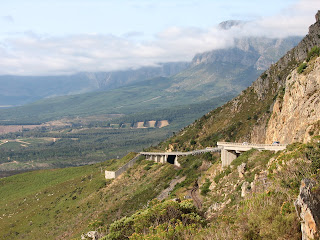 My intention was to return by Sir Lowry Cole's pass, over the same chain of mountains but a little further to the South. Following unfrequented paths we crossed over an irregular hilly country to the other line of road. During the whole long day I met scarcely a single person, & saw but few inhabited spots or any number of cattle. A few Raebucks were grazing on the sides of the hills, & some large dirty white Vultures like the Condor of America slowly wheeled over the place where probably some dead animal was lying. There was not even a tree to break the monotomous uniformity of the sandstone hills. I never saw a much less interesting country. — At night we slept at the house of an English farmer.
Posted by Arborfield at 07:44