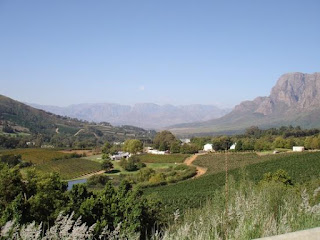 After riding about three hours, we came near to the French Hoeck pass. This is so called from a number of emigrant protestant Frenchmen having originally settled in a flat valley at the foot of the mountain: it is one of the prettiest places I saw in the colony. — The pass is a considerable work, an inclined road having been cut along the steep side of the mountain: it forms one of the principal roads from the low land of the coast to the mountains & great plains of the interior. We reached the foot of the mountains on the opposite or SE side of the pass a little after noon; here at the Toll-bar we found comfortable lodgings for the night. The surrounding mountains were destitute of trees & even of brushwood, but they supported a scattered vegetation of rather a brighter green than usual, the quantity however of white siliceous sandstone which every where protruded itself uncovered, gave to the country a bleak & desolate aspect.
Posted by Arborfield at 07:58