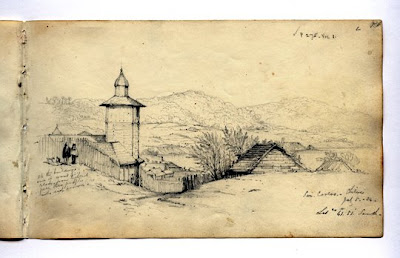 [San Carlos, Chiloé]
With Darwin and the Beagle still 'all at sea', another image from Conrad Martens.
The sky is blank above a horizon line of verdant hills, mainly shrubby but with a clump of trees on the left. These hills form the backdrop to a midground occupied by rolling lowland, probably under cultivation, behind a lake or inlet stretching from the centre to the right of the picture. There is a group of small buildings on the shore in the centre left. The expanse of water is partly obscured by the features in the right centre and right of the foreground, where the pitched tiled roofs of two buildings appear above the edge of a rising slope. The walls of these buildings seem to be constructed of large blocks, though this is not consistent with the annotation. Behind both buildings there are clumps of small trees. To their left we can see a rough low fence of thin wooden uprights. In the left centre between the end of this fence and an apparently better constructed more distant fence descending the slope, an opening suggests a pathway. On the left above the fence there is a tall building with timber uprights, in front of which stands a human figure. The timber uprights support a pitched roof with a flat top, behind which rises a tall square tower with a small pitched overhanging roof of its own, and a cupola on its top. More fencing runs from this building up towards the left-hand edge of the picture. Two figures, one with a dark top and light trousers, the other vice versa, walk towards the left-hand edge of the picture, with a small dog and another small animal standing to their left. Above and behind the figures and the fencing other roofs are indicated. The annotation to the left reads: "all the buildings are of wood -- colour from lightest green, thro purples to rich brown--".
Posted by Arborfield at 06:43