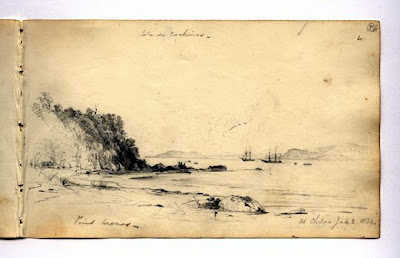 Captain Fitzroy’s Journal:
The Adventure arrived, her main-boom having broken in a heavy squall on the 27th, in consequence of which she got to leeward, and was prevented from sooner weathering the north end of the island.
* In the left midground a flat topped rocky outcrop with a dense covering of shrubs slopes down abruptly to a line of rocks at the water's edge, running from the left centre to the centre of the picture, with three seabirds perched at the midpoint, and two others alighting on the water behind them to their right. In the left and centre of the foreground, there is an inlet, to the left and in the foreground to the front of which lies an uneven shore. The shore ground is dotted with tufts of grass on the left, and in the right centre with a rock from which a small shrub sprouts. In the midground, to the right of the line of rocks and more distant, the Adventure and Beagle are visible, facing left with the small boats off to the right. Behind the boats the far horizon consists of low rounded hills in the centre, rounded bigger hills on the right closer to the viewer. The sky has a very faint indication of what are probably cumulus clouds in the centre, and a line of birds flies diagonally rightwards.
Posted by Arborfield at 19:08