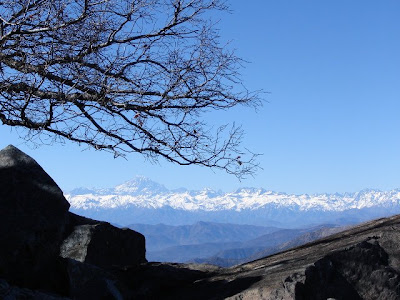 Valparaiso
When morning came everything appeared delightful; after Chiloe & T. del Fuego we felt the climate quite delicious; the sky so clear & blue, the air so dry & the sun so bright, that all nature seemed sparkling with life.

The view from the Anchorage is very pretty; the town is built on the very foot of [a] range of hills, which are 1600 feet high, & tolerably steep; the surface is worn into numberless little ravines, which exposes a singularly bright red soil between patches of light green grass & low shrubs. — It is perhaps for this reason & the low white-washed houses with tile roofs, that the view reminded me of Teneriffe & others of Madeira. — The harbor is not large & the shipping is crowded together. In a NE direction there are some fine glimpses of the Andes. These however appear much grander when viewed from the neighbouring hills; we then better perceive how far distant they are situated. The Volcano of Aconcagua is especially beautiful. The Cordilleras, however, viewed from this point owe the greater part of their charms to the atmosphere through which they are seen; when the sun sets in the Pacific it is admirable to watch how clearly the rugged outline of their peaks can be seen, yet how varied & how delicate is the tint of their colours. When in T. del Fuego, I began to think the superiority of Welsh mountain scenery only existed in my imagination. Now that I have again seen in the Andes a grand edition of such beauties, I feel sure of their existence.
.
Captain Fitzroy’s Journal:
My first object would have been, after seeing the vessels securely moored, to go to Santiago, present my instructions in the proper quarter, and ask for the sanction of the Chilian government, in prosecuting the survey of the coasts of Chile; but I was so much in arrear with respect to computations and charts, that I could not venture to give even a week to an excursion to that agreeable place, where a thousand attractive novelties would inevitably have diverted my attention in some measure from the dull routine of calculation, and attention to the data accumulated by many months' exertion of those on board the Adventure, as well as in the Beagle; therefore I sent Lieutenant Wickham, who spoke Spanish, and had been at Santiago before, to show my instructions to the Authorities, and request their approval of our examination of the shores under their jurisdiction. Nothing could be more satisfactory than the reply, and from that time until the Beagle left Chile she received every attention and assistance which the Chilian officers could afford.
.
Syms Covington Journal:
From all parts of Valparaíso we have a fine and noble view of the majestic Cordillera -- Aconcagua (the MOUNTAIN second in height in the whole range of South America) towering above all with its snowy summit, when distinctly seen, FOR IT IS very often clouded, having a most beautiful and sublime effect. The valleys clothed in verdure, bushes and trees, with sweet smelling flowers, and those of the most variegated colours, and varieties, and peopled with numerous little chirping birds of many species, AND immense numbers of humming birds buzzing about like bees. The stately condor hovering round on all parts, and above all the beautiful azure blue of the heavens, which altogether has the appearance of a fairy land, after just leaving the inhospitable shores of Tierra del Fuego, and the wet and gloomy Chiloé Isle, where we rarely had a clear or sun shining day.
Posted by Arborfield at 08:26